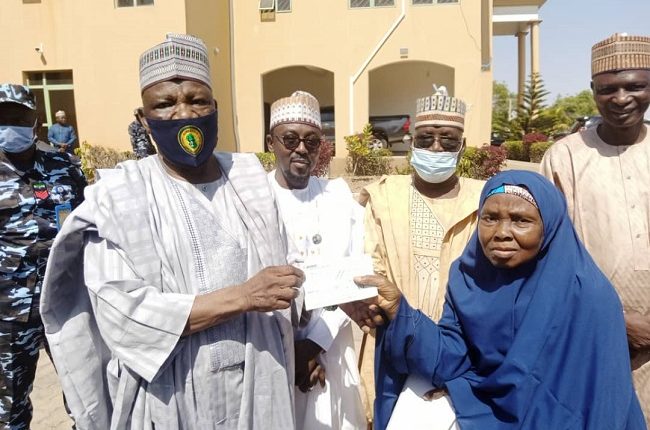 Gombe State Government has commenced the payment of the second tranche of the backlog of gratuity owed 2015 retirees in the state.

Recall that Governor Muhammadu Inuwa Yahaya had last week released the sum of N750m in addition to the like sum earlier approved, making it a total of N1.5 billion for the exercise aimed at bringing relief to the retired civil servants.

Speaking at a brief ceremony to mark the commencement of the issuance of cheques to the retirees, the State Governor Muhammadu Inuwa Yahaya vowed to ensure that the retired civil servants get what they deserve from the Government, stating that despite the meagre resources available to the State, his administration would continue to bring relief to the entire workforce in the State and its senior citizens.

Represented by his Deputy, Dr Manassah Daniel Jatau, the Governor remarked that no civil servant who served the State meritoriously up to retirement period will be treated with disdain.

He reiterated his commitment towards offsetting the backlog of inherited gratuity and continue to do so until all verified retired civil servants in the State get their entitlements.

He called on retirees in the State to remain calm as the State Government under his leadership will not develop a cold feet towards the payment of entitlements due to civil servants whether in active service or in retirement.

The Governor said despite inheriting a humongous amount of liabilities in pensions and gratuities, his administration will continue to work out modalities within available resources to see to it that retired civil servants collect and enjoy the fruits of their labour.

According to the Governor, “We are determined to ensure that workers who have served the state and retired enjoy dignified and comfortable retirement life. This is exactly the reason for the payment of outstanding liabilities of gratuity”.

Inuwa Yahaya decried that Local Government retirees in the State have not received their gratuities since 2012, disclosing that he had already set up a committee to ascertain the records with a view to paying them soon.

In his remarks, the Commissioner of Finance and Economic Development, Muhammad Gambo Magaji said so far over 3 billion naira has been paid by the present administration from the backlog of gratuity left behind by the previous government.

He stressed that the government is not celebrating the payment which has dragged since 2015 saying, “We had started with the first tranche of payment for 2014 and we are now paying 2015″.

He assured that government will continue to remain responsive to the yearnings of the senior citizens even as he emphasized that Governor Inuwa Yahaya had put machinery in place to address the plight of local government retirees.

Earlier speaking, the Committee Chairman on verification and the payment of gratuity, Muhammad Buba Gombe, who is also the State’s Auditor- General, said the seven hundred and fifty-five million naira earmarked for the payment of the 2015 second phase of gratuity represents second 50% in succession.

He explained that about seven hundred 2015 retirees are expected to benefit from the second phase of the payment.

Buba Gombe maintained that the State Government under the leadership of Governor Muhammadu Inuwa Yahaya has put machinery in motion to ensure the systematic and steady payment of liabilities owed in pensions and gratuities.

Appreciating the State Government’s gesture, the Secretary of the Nigerian Union of Pensioners, Gombe State, Adamu Danjuma thanked Governor Muhammadu Inuwa Yahaya for deeming it necessary to settle the backlog of gratuity retired civil servants in the State.

He expressed confidence in the administrative acumen of Governor Inuwa and his commitment towards the continuous payment of outstanding liabilities. He assured of support and solidarity of the senior citizens as contained in a statement by Ismaila Uba Misilli, Director-General ( Press Affairs), Government House Gombe.