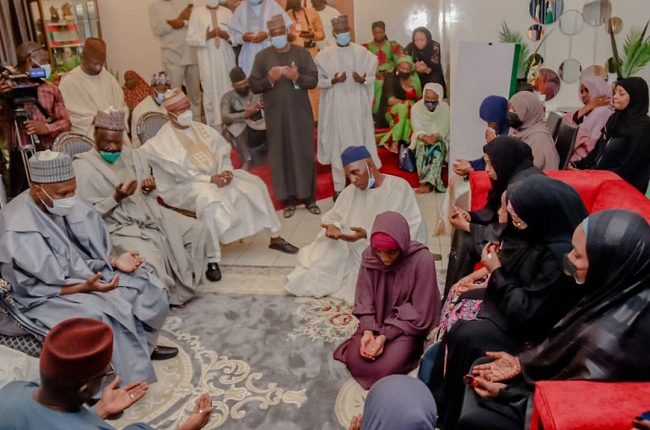 Gombe State Governor, Muhammadu Inuwa Yahaya, on Monday, paid a condolence visit to the family of the late Chief of Army Staff, Lt. Gen. Ibrahim Attahiru, who died in a plane crash alongside other senior military officers and crew members in Kaduna.

Yahaya who was accompanied by the Commissioner of Energy and Mineral Resources, Alhaji Shehu Ibrahim Madugu; Special Adviser, Abuja Liaison, Hon. Usman Aliyu Garry and other aides were received by the Chief of Naval Staff, Rear Admiral Awwal Zubairu Gambo at the official residence of the late Army chief in Niger Barracks, Abuja.

While consoling the wife of the deceased COAS, Fatima Attahiru and other members of the family, Governor Yahaya described the death of the late Attahiru as a monumental loss to his immediate family and associates and the entire nation.

He urged Mrs Attahiru and other members of the bereaved family to “take solace in the fact that all mortals shall taste death and we must answer the call of Almighty Allah at one point in time or another.”

He also prayed Almighty Allah to accept the souls of the departed heroes and grant them eternal rest as contained in a statement by Ismaila Uba Misilli, Director-General, Media and Publicity to the governor.