Gombe governor to create agency for welfare of persons with disabilities 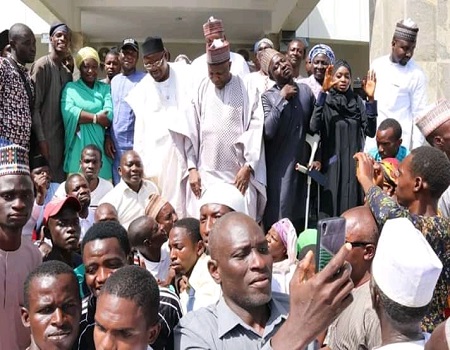 Gombe State Government is to create an agency that will cater for the welfare of people living with disabilities in the state in order to give them a sense of belonging to society.

This was disclosed on Tuesday by the State Governor, Muhammadu Inuwa Yahaya while interacting with members of the Association of Persons with Disabilities at the Government House, assuring them of his administration’s resolve to facilitate the creation of the Agency as soon as possible.

Speaking during the International Day of People with Disability which is held on December 3 every year with the aim of increasing public awareness, understanding and accepting people with disability and celebrating their achievements and contributions.

Inuwa Yahaya commended the persons with disabilities in the state for seeing the ability in their challenges, saying that his administration will accord them all the necessary support to actualise their respective dreams.

He stated that ” I want to assure you that Government is with you come rain, come sunshine. We are willing to support you in all its ramifications. We will, very soon, send a bill to the State House of Assembly to seek for the establishment of an agency for the disabled to cater for your welfare and support your endeavours “.

In her own remarks, State Commissioner of Women Affairs and Social Development, Naomi Awak said that her Ministry is already working with the association of persons with disabilities in the state to ensure that they were carried along in the scheme of things and give them a sense of belonging.

She thanked them for their unrelenting support to the State government, urging them to continue in that direction.

Chairman of the association of persons with disabilities, Gombe state branch, Umar Goro appreciated Governor Inuwa Yahaya for his show of love and compassion for the disabled in the state, describing their meeting with the governor as unprecedented in the history of the state.

He pleaded for the establishment of more skills acquisition centres, especially across the three senatorial zones of the state, just as he called on the government to grant them and their children free education, addition facilitating donor agencies support in view of their challenges.

This year, the International Day of Persons with Disabilities (IDPD) focuses on the empowerment of persons with disabilities for inclusive, equitable and sustainable development as anticipated in the 2030 Agenda for Sustainable Development, which pledges to ‘leave no one behind’ and recognises disability as a cross-cutting issues, to be considered in the implementation of its 17 Sustainable Development Goals (SDGs).