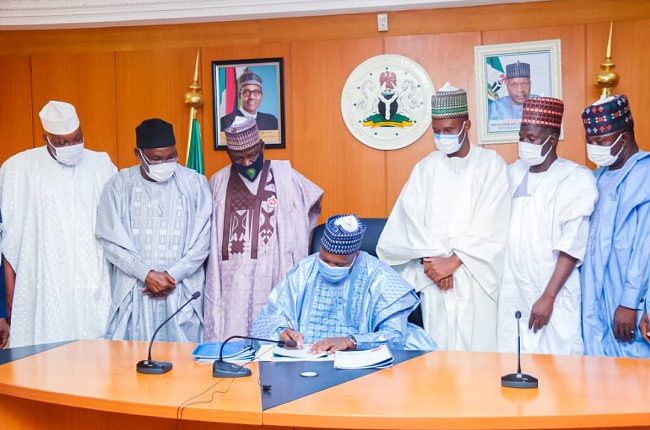 The N120bn 2021 appropriation bill (budget) passed by the Gombe State House of Assembly has been signed into law by the Governor Muhammadu Inuwa Yahaya.

Speaking shortly after signing the budget at the Council Chamber of the Government House, Inuwa Yahaya attributed the expeditious passage of the bill into law to the harmonious relationship amongst the three arms of government in the state.

The governor said: “Last year around this time precisely on the 27th of December 2019, we signed the 2020 Appropriation Act and this year we did it much earlier. That means we are improving on efficiency and our processes and procedures are always improving in order to improve the lots of the people of Gombe State.”

He also used the occasion to thank the people of the state for their support to his administration and the House of Assembly for the effective and efficient way they handled the appropriation bill and other bills sent to it by the executive arm, saying “this shows the level of synergy existing among the three arms of government.”

He said that his administration will continue to work assiduously to make sure that the greater chunk of the people’s resources go to them through judicious resource management.

Inuwa Yahaya said that the christening of the 2020 Appropriation as ‘budget of resilience’ means a lot not only to those in government but also the entire people of the state. To this end, the governor called on the people of the state to be more resilient cooperative and hardworking.

The governor said that: “Everybody knows the effect of the COVID-19 pandemic and what it has created not only within the Nigerian society but also indeed the entire world and if we work hard enough to overcome the challenges we shall come out stronger more than ever before.”

In his remarks, the Speaker of the Gombe State House of Assembly, Abubakar Mohammed Luggerewo said the budget was given expeditious passage because of its contents which he noted have given priority to the economic development and welfare of the people.

He said that 52 percent for capital expenditure and 48 percent for recurrent expenditure indicated a clear departure from what was obtained in the past where expenditure on governance outweighed service to the people.

The speaker lauded the governor for concentrating on people-oriented projects, policies and programmes which he termed as the hallmark of inclusive governance that prioritizes accountability and transparency.

The budget signing ceremony was witnessed by senior government officials, including the Deputy Governor, Dr. Manassah Daniel Jatau, members of the state House of Assembly, Secretary to the State Government, Head of Service, Commissioner of Finance, Special Adviser to the Governor on Budget, Planning and Development Partners Coordination among others.