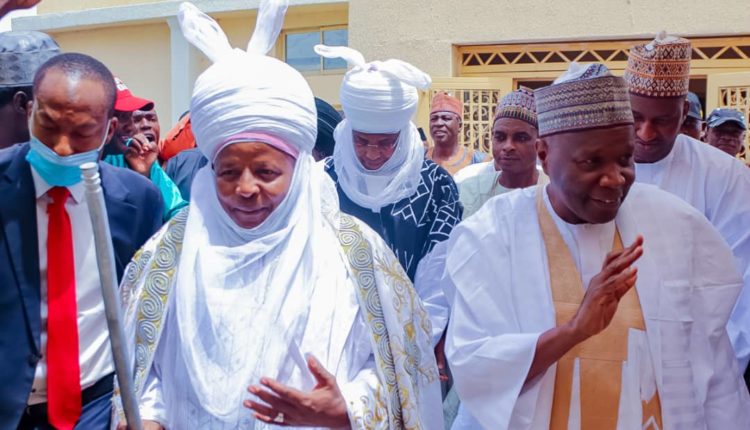 Share
Gombe State Governor, Muhammadu Inuwa Yahaya has explained that the Nigeria National Petroleum Corporation (NNPC) through the Frontier Exploration Division of the agency has injected a lot of resources and that a significant quantity of oil that is commercially viable to the tune of over 6 billion barrels has been found in the Kolmani area.
He therefore assured that his administration will not relent in pushing for the actualisation of exploration of the already discovered oil in Kolmani area of Pindiga Emirate of Gombe State.
Inuwa Yahaya stated this at a civic reception organized in honour of the retired Acting Chief Judge of Gombe State,  Hon. Justice Muazu Abdulkadir Pindiga, held at Pindiga, Akko local government area on Saturday.
He said that he had on several occasions, visited the corporate headquarters of the NNPC and also met with President  Muhammadu Buhari to interface with them on how best the state can benefit from the oil and gas deposits in the state.
The Governor, however, noted that “But for the economic crunch experienced lately, occasioned by Covid-19, the Federal Government had concluded plans to begin the exploitation of the over 6 billion barrels of crude oil in the area; but I assure you this will happen, and I am committed to seeing to that.”

During the occasion, Inuwa Yahaya tasked the immediate past Acting Chief Judge of Gombe State not to jettison his fine and exceptional characters that distinguished him as a forthright judge in the temple of justice.
The Governor then expressed optimism that the retirement of Justice Pindiga will further provide opportunity for him to continue doing more for the good of his immediate community of Pindiga Emirate, the State and the Country as a whole.
The Governor also thanked the people of Pindiga Emirate for their steadfastness in supporting his administration’s policies and programmes, assuring them that the State Government under his leadership will reciprocate the gesture by continually implementing programmes that have social and economic value to the people.
The chairman of the occasion and former Minister of Transport, Sen. Abdullahi Idris Umar thanked the governor for standing tall towards the actualization of the full oil exploration in the Kolmani of Pindiga Emirate.
He also expressed gratitude to the Emir of Pindiga for deeming it necessary to honour the retired Justice Pindiga, noting that the mammoth crowd that came to witness the reception was a pointer that the retired legal luminary is a man of the people.
In her goodwill message,  former President of the Federal Court of Appeal, Justice Zainab Adamu Bulkachuwa, noted with satisfaction, the performance of Governor Yahaya within short period of his stewardship.
Bulkachuwa also congratulated the retired Justice Pindiga for successfully exiting the judiciary without blemish and thanked Pindiga Emirate for the honour done to her.
She described Justice Pindiga as an astute jurist whose hard work and dedication to the dispensation of Justice is pragmatic.
The Emir of Pindiga, Muhammad Seyoji Ahmed in his address, noted that the seeming imbroglio between Gombe and Bauchi states over the Kolmani oil field will not cause any rift between the two sister states.

He expressed  gratitude to Yahaya for executing numerous projects in Pindiga Emirate and appealed for the construction of an access road to the oil rigs in Kolmani.
He stated that the reception, organized in honor of Justice Muazu was in recognition of his numerous contributions to the growth and development of Pindiga Emirate, the Judiciary and the State at large.
Guest Speaker at the civic reception, Gombe State Attorney General and Commissioner of Justice,  Barr. Zubair Muhammad Umar described Justice Muazu Pindiga as a distinguished jurist who has shown a rare character in the administration and dispensation of justice to all manner of people irrespective of ethnic, religious or political affiliations.
He said Gombe Judiciary will miss his fire brand contributions towards the growth and development of the judicial sector in particular and Gombe State in general.
The Attorney General praised the decision by Pindiga Emirate to honour the retired jurist with the traditional title of Katukan Pindiga, describing the honour as a right step in the right direction.
Governor Inuwa,  was earlier accorded a warm welcome into Pindiga by horse riders and mammoth crowd of supporters.
Share