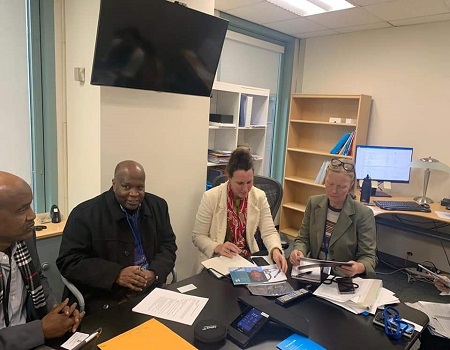 Management of the UNDP has pledged to support Gombe state’s strategic development plan just as the UNICEF promises to step up activities on Health, education, water, sanitation and others in order to promote health care service delivery in the state.

This was achieved during the rounding off of strategic engagements at the United Nations Headquarters in New York, by the Gombe State Governor, Alhaji Muhammadu Inuwa Yahaya when he met with the Assistant Secretary-General and United Nations Development Programme,  UNDP’s Regional Director for Africa, Ms Ahunna Eziakonwa-Onochie and her team.

During the meeting, Inuwa Yahaya explained to his host some of the measures taken by his administration to tackle some of the inherited development challenges, including commissioning a needs assessment of critical areas across over 400 communities in the state.

The Governor sought for partnership and support in the production of a Development Plan for the state as well as in designing a sustainability framework for the Gombe  Goes Green (3G) programme.

He also made a case with the UNDP for the scaling up of interventions in livelihoods and capacity building under the ‘Fostering Sustainability and Resilience for Food Security in the Savanna Zones of Northern Nigeria’.

In her remarks, the UNDP Regional Director for Africa appreciated Governor Inuwa Yahaya’s vision for his state and expressed readiness to help in translating his foresight into a development plan.

She also expressed the willingness of UNDP to provide linkage to donors and partners supporting climate change action and unlock financial resources available within the UN system and beyond to support the 3G project.

The UNDP also offered to extend its activities in the state on the prevention of violent extremism and investment in youths.

Similarly, Governor Inuwa  Yahaya also held discussions with officials of United Nations Children’s Fund, (UNICEF) where the Fund expressed willingness to increase its support to the state in the areas of Water , Sanitation and Hygiene (WASH) as well as provide linkage with global partners that can support Gombe in education, health and nutrition as contained in a statement by Ismaila Uba Misilli, Senior Special Assistant, Media and Publicity to the Governor.