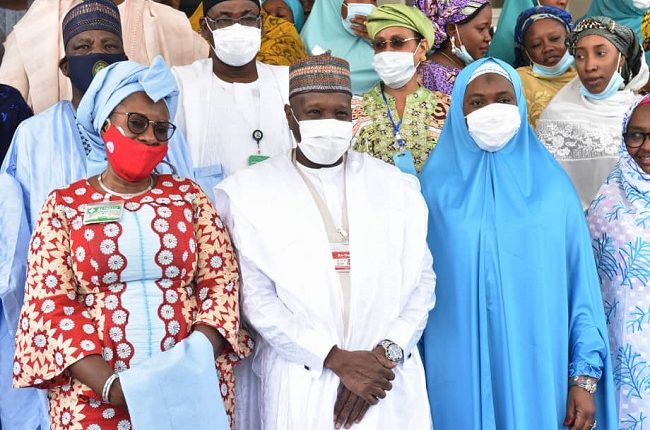 Gombe State Governor, Muhammadu Inuwa Yahaya has declared that his administration will collaborate with the federal government and relevant organisations to tackle gender-based violence and all vices affecting women and children.

The Governor was speaking while receiving in audience the Minister of Women Affairs, Dame Pauline Tallen who was on advocacy visit to interface with government and other stakeholders in the state.

Inuwa Yahaya described the minister’s visit as timely in view of the spike in cases of rape, gender-based violence and child abuse which bedevilled the state and the country, especially during the covid-19 lockdown.

He also said that given these unfortunate happenings to children and the womenfolk, the Nigerian society appears to be tilting towards moral bankruptcy which is inimical to the cultural values and heritage of the people.

The Governor said that “As a mother, you naturally have to be more concerned than all of us but we are equally concerned; we must therefore work assiduously in order to address these issues and cover these gaps so that our children and grandchildren grow up to live in a happier and better world.”

To this end, Inuwa Yahaya pledged his administration’s commitment to work in consonance with the Federal Ministry of Women Affairs to checkmate incidences of violence against women in the State.

The Governor who described women as the backbone of political emancipation assured that his administration will continue to expand the political space to accommodate more women in governance, especially as the state prepares for the December 19th local government election.

He said that “Without the women, a great portion of our political train will be cut off, so we shall continue to engage and involve them in politics and governance.”

The Governor further said that the measure his administration has taken in respect to girl-child, adult and non-formal education programmes was such that the interest of women is accommodated and protected.

The Governor said, “If Gombe State can produce vibrant and quintessential amazons in the likes of Amina J. Mohammed, Deputy Secretary-General of the United Nations, Zainab Bulkachuwa, former President of the Court Court of Appeal and Aishatu Jibir Dukku, then you can understand that there is no limit to what our women can achieve given the necessary support and encouragement.”

He then told the Minister that his administration is on course to provide a shelter that will serve as home to abused women and trafficked children which will be under the supervision of the State Ministry of Women Affairs and social development.

On Violence Against Persons Prohibition and Child Rights Acts, Governor Inuwa Yahaya said discussions have reached an advanced stage with the State House Assembly to fine-tune both Acts for their passage and eventual ascent.

Earlier speaking, the Minister of Women Affairs, Dame Pauline Tallen commended Governor Muhammadu Inuwa Yahaya for his people’s friendly policies which include opening up of the state through the Network Eleven-Hundred road project initiative, the approval of one billion for women and youth empowerment and the selling of fertiliser to women at a subsidised price.

The Minister equally thanked the Governor for revamping the health sector, which she described as fundamental to the survival of women and children in the State.

She described as worrisome the increasing cases of Sexual and Gender-Based Violence SGBV meted on women, particularly minors, saying such an act is criminal which must be condemned by all especially the men’s fork.

Dame Pauline Tallen, however, appealed to the Gombe State Governor to raise the bar in women participation in politics in Gombe State, especially as the State prepares for the local government elections.

The Minister who described Governor Inuwa Yahaya as a women-friendly Governor and champion of women course said this virtue came to play when he personally place a call to her expressing his concerns over the arrest of some individuals who specialize in trafficking children.

She appealed to the Governor to expedite action towards the passage of the Violence Against Persons Prohibition (VAPP) and Child Rights Acts which are pivotal to the survival of children in the State and the country at large as contained in a statement by Ismaila Uba Misilli, Senior Special Assistant, Media and Publicity to the Governor.

A fuel tanker has exploded at Anthony inward Gbagada, Lagos State. This happened as a result of the tanker losing control while on motion and fell sideways thereby leading to an explosion and got two unidentified vehicles burnt…women participation in politics

Hundreds of followers of the Speaker of the House of Representatives, Hon. Femi Gbajabiamila have continued to react to the twitter message on his official twitter handle: @femigbaja, on his engagement with his counterparts from Ethiopia, Ghana, Kenya, Senegal and South Africa on the planned collaboration in the joint task of loosening the stranglehold of foreign debt on our economies, ahead of the 2021 conference of African Speakers, scheduled to hold in Abuja…women participation in politics  women participation in politics