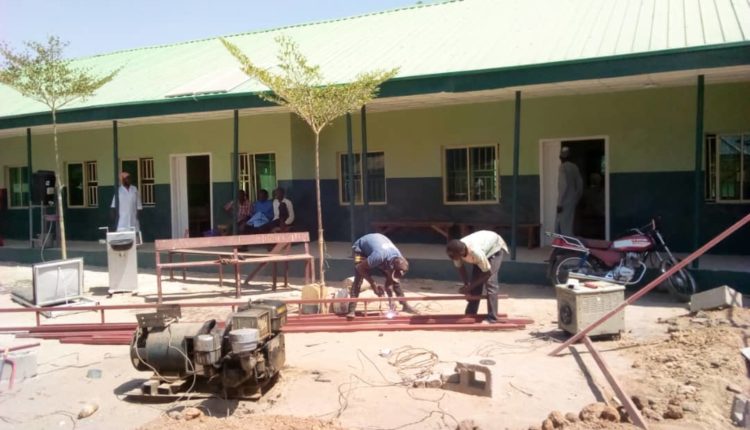 In a move aimed at improving the health status of women and children through the revitalization of Primary Health Care delivery system in Gombe State, China government through UNICEF has granted a $1m facility to the state.

The facility is to be used for improving the functionality of PHC services delivery in health facilities, outreaches and community-based services in ten wards of Kwami Local Government Area of the state which includes Dukkul and Mallari communities.

Beneficiaries of services at the Primary Health Care Centres in Dukkul and Malleri applauded the grant which is to improve the health status of women and children with Managers of the facilities in an interview with newsmen saying that the project has resulted in an increase and patronage of facilities especially antenatal and children services.

Ruth Musa, the Assistant Facility Manager at the Dukkul Primary Health Centre said that before the intervention, they received barely 100 clients in a month, especially women on ANC explaining that with the upgrading of facilities and improved services at the centre, they now receive no fewer than 500 women in a month.

According to her, even though work was still ongoing, the intervention has resulted in an impressive outcome in the community saying, “We had very serious challenges of water provision, but we now have water in abundance. We have enough drugs especially at the ANC section, that is, routine drugs, testing instruments are now available. It has made the women to be interested in coming for ANC and delivery is improving.”

She added that “those facility workers that attended the training some months earlier, we have experienced a lot of improvement in the activities of women and children.”

Ruth Musa also stated however that, “we are appealing to the Government for more beds. There are only six beds in the facility and they are all in the female ward while the male ward is empty. We don’t have laboratory and people come from neighbouring communities of Funakaye and Yamaltu/Deba LGAs.

Aisha Mohammed who brought her child to the facility during our correspondent’s visit told reporters that the workers are trying saying, “there is a great improvement in drugs and services compared to what was obtained in the past”.

However, in Malleri PHC, a staff, Mohammed Adamu who spoke on behalf of the facility manager said that the staff and the entire community commend the programme but noted that manpower is still a challenge following the increasing number of patients that visit the facility now.

According to him, “in the past, four staff on a shift could handle the patients that visit since they are not more than twenty in a day. But the staff strength is just about six and the facility requires more hands to handle over forty clients that visit on a daily basis. The staff comprises Junior Community Health Workers (JCHEWs), Community Health Workers (CHEWs), Environmental Health Officer and a midwife.”

He stated also that sometimes drugs supply to the facility ceases but that whenever they complained, the supply is usually returned when there is availability in the LG store.

He explained that “When we complain, they tell us to wait until they get supply too. The drugs are mostly malaria drugs and folic acid which we currently have, thus, resulting in the influx of patients”.

The $1m China fund is being implemented in only Kwami LGA and it is hoped that there will be a great reduction of maternal, newborn and child mortality and morbidity in Gombe State.

The British Parliament at the Westminster Hall held a debate on ‘e-petition 554150, relating to Nigeria and the sanctions regime’ on Monday. The government of the United Kingdom has however responded…Gombe gets China  Gombe gets China

The surprise visit made on Friday night by the leaders of the ruling All Progressives Congress (APC) to former President Goodluck Jonathan at his residence in Abuja triggered a stir in the major political camps, resulting in at least four possible theories..Gombe gets China  Gombe gets China