•As non-interest financial institution sets to open branch in Gombe 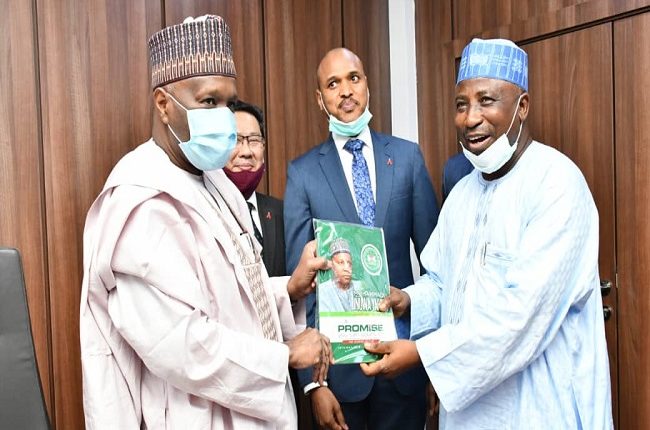 Gombe State Governor, Muhammadu Inuwa Yahaya has said that the state is ready to take advantage of the innovative products and services offered by the newly established Taj Bank for the benefit of the people of the state especially in the area of agriculture as well as small and medium scale businesses.

The Governor stated this when he visited the corporate headquarters of the bank which is a non-interest financial institution recently licenced by the Central Bank of Nigeria (CBN) in Abuja as contained in a statement by Ismaila Uba Misilli, Senior Special Assistant on Media and Publicity to the Governor.

During the visit, Inuwa Yahaya was briefed by the Chairman of the bank, Alhaji Tanko Ishiyaku Gwamna and the Managing Director, Mr Norfadelizan Abdulrahman on the activities, operations and products of the bank.

The Governor noted that the products and services of the bank are favourable to smallholder businessmen and women, especially those in the rural communities who may not have the capacity to access loan facilities from conventional banks.

He said that the Gombe State will leverage several packages introduced by the bank to boost financial inclusion and empower the people economically.

The Governor further noted that there are a lot of opportunities to unlock through the bank, especially with various Central Bank of Nigeria’s agricultural facilities and intervention funds which will benefit the people of the State.

The Governor said in spite of the misconceptions concerning non-interest banking, statistics have shown that people of all faiths access its services.

He said that “Am sure all of you know very well that Gombe is the centre of commerce in the North East because we share boundaries with all the states of the region; so our centrality makes it convenient for all the neighbouring states to have commercial relationships and activities with Gombe. This will definitely help a lot in making you reach out to large chunk of the people.”

Inuwa Yahaya, however, expressed optimism that with the current COVID-19 pandemic, CBN has a wide window to accommodate all the products of the bank especially as it affects anchor borrower and financial support to small and medium scale enterprises.

He then congratulated the bank for its achievements so far and assured the financial institution of the support of the government and people of Gombe State.

Earlier, the Chairman of the bank, Alhaji Tanko Ishiaku Gwamna said Taj Bank was established about a year ago after obtaining its license from the central bank of Nigeria to explore the non- interest financial sector which he said comes with a lot of opportunities.

He said due to its ease of doing business, developed countries are now taking advantage of non-interest financial instrument to expand the frontiers of their businesses.

While thanking Governor Inuwa Yahaya for being the first state chief executive to visit, Alhaji Gwamna assured the government and people of Gombe State that the Bank will partner with the state to boost its financial inclusion and the economy in general.

He assured that “Very soon we are going to open our branch in Gombe, which will serve as a regional hub because of its strategic location and business opportunities as well as the disposition of Your Excellency and the foundation you laid for business to thrive.”

The Managing Director of the bank, Mr Norfadelizan in his remarks said Gombe state will soon feel the presence of the non-interest financial institution through its services and technology which will eventually ink the state to other parts of the world and help unlock a lot of opportunities, including leveraging on the Nigeria- Malaysia business relationship.

The Executive Director of the bank, Ahmed A. Joda said that the presence of the new financial institution in Gombe will help expand the economic frontiers of the state, especially in the area of Agriculture.

He said, ” We are looking at the CBN intervention funds, including the anchor borrower, commercial agricultural credit scheme and so many other agric related funds which we want to unlock for the people of Gombe state and which we believe the agric entrepreneurs in the state will benefit immensely from.”

COREN urges FG to ensure implementation of Executive Order No. 5