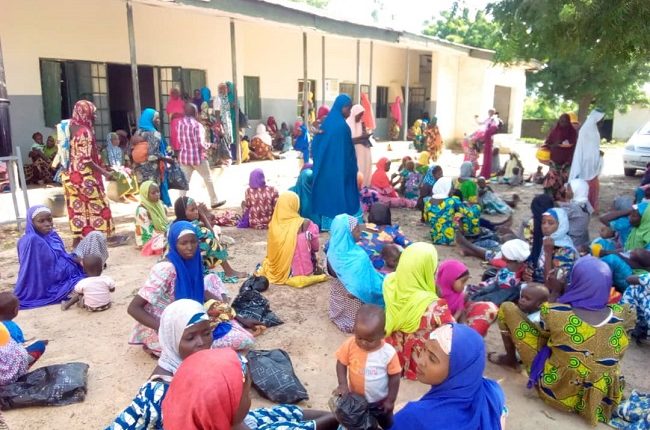 The Gombe State Government has established more Centres for the Management of Severe Acute Malnutrition (CMAM) in order to be able to attend to more of malnourished children.

During a visit to Malam Sidi in Kwami Local Government Area where one of the CMAM centres was recently established, women were seen trooping into the facility to access services for the treatment of severe acute malnutrition in their malnourished children, a scourge that has remained a challenging decimal to the Gombe State Government.

According to the Nutrition Focal Person for Kwami Local Government Area, Jamilatu Ahmed Waklili, in just a little over four weeks when the centre commenced activities, they received 50 clients but they are expecting no fewer than 350 parents coming with their malnourished children to access the services for the treatment of severe acute malnutrition.

She, however, stated that they are faced with challenges which include lack of enough thermometers, timers, infant weighing scales as well as lacking a conducive environment for the comfort of the clients.

Jamilatu Wakili added that “we don’t have many thermometers, timers, infant weighing scales and comfortable seats for the clients. We need more staff as we have only five that are trained and most times we stand to do our work”.

Despite the challenges faced at the facility, she said that she along with the clients were happy for the establishment of the centre in Malam Sidi and some others across Kwami Local Government Area.

She further said that “we were referring an uncountable number of clients to Gombe, but with the commencement of this programme here, I am particularly happy as well as the clients who are coming from their various communities”.

The Gombe State Government had recently released the sum of N25 million out of the approved N75 million allocation to tackle malnutrition and recent investigation has shown that the amount was able to procure 1,549 cartons of the RUTF.

An investigation has also revealed that there are only about 90 cartons of the RUTF left in the state signalling some danger in the next two weeks when the stock is expected to have finished thereby creating an out-of-stock situation which may lead to relapse in some of the malnourished children.

A coalition of CSO and media had in a save our soul (SOS) visit to the Gombe State Ministry of Health called on the ministry to facilitate the release of the remaining N50 million to save an impending Severe Acute Malnutrition crisis after two weeks.

It will be recalled that before now, the CMAM centres were only operational in 4 LGAs of Gombe, Dukku, Nafada and Kaltungo Local Government Areas where treatment also include free distribution of Ready-to-Use-Therapeutic-Food (FUTF) to the affected children.

However, the upsurge for the treatment of severe acute malnutrition by most parents for their children has made the State Government establish new CMAM centres in Akko and Kwami local government areas leaving out five other LGAs in the state.