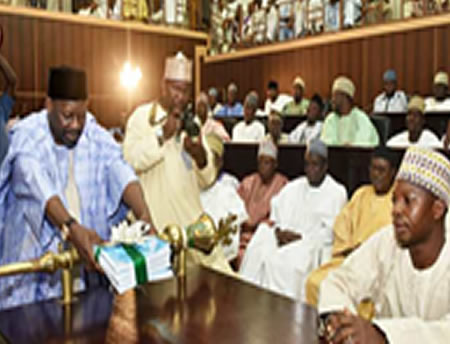 Four members of the Gombe State House of Assembly who belong to the All Progressive Congress (APC) have been suspended for four legislative days by the House following the commotion caused in the attempt to whisk the Mace which is the symbol of authority of the House having been found culpable in the incident.

The House also called on the Police to fish out other culprits that took part in the shameful act and immediately get back the mace to enable the House continue its constitutional function of legislation.

The Majority Leader of the House, Honourable Fabulous Amos, who is also the Chairman of the House Committee on Information told Journalists after its emergency sitting presided over by the Speaker, Abubakar Nasiru Nono, that the four APC suspended members are, Abdullahi Abubakar, Mohammed A Bello, Ibrahim Sadiq and Walid Mohammed.

According to him, “constitutionally, based on the standing order of the Gombe State House of Assembly, we have section 65 subsection 1 to 7, it deals with such kind of misbehaviour and like we have collectively decided, based on that section that gives us the power to suspend a member who engage himself in such act”.

He added that, “We evoke that particular section and applied it to them. This means we have suspended them for four legislative days and not only that, we have agreed to give them a Fair hearing.

“We have referred the case to the Committee on Ethics and Privileges to investigate and report back to the House on Monday 28th May, 2018 for further action”, he said.

When asked how they came up with that decision without the mace, Honourable Fabulous said, “just like what happened in the National Assembly few weeks back, another mace was provided”, though he refused to disclose where they got the Mace from”.

Honourable Fabulous also revealed that the House has called on the attention of the security outfits in the State to look for the culprits and get back the mace immediately.