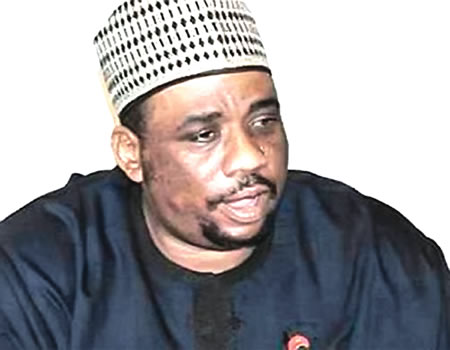 CAMPAIGN organisation of Gombe state PDP Guber candidate in the 2019 general elections, Usman Bayero Nafada has denied a trending social media campaign which suggests that he is campaigning and drumming up support for President Muhammadu Buhari who is the presidential candidate of the ruling All Progressive Congress (APC).

The denial was made by the Director of the Media and Publicity Committee of the organisation, Dahiru Hassan Kera in a statement made available to newsmen in Gombe condemning the trending picture of Senator Usman Bayero Nafada declaring that the said the trending photo is the mischievous handwork work of the candidate’s detractors who would go to any length to paint him in bad light.

The statement further contained that the social media campaign of calumny depicting PDP Governorship Candidate in Gombe State, campaigning for President Muhamadu Buhari in a trending 4+4 photo has no iota of truth in it.

ALSO READ:  2019: North-East women enjoined not to use henna

According to the statement, “the Council wish to draw the attention of our supporters, members of the PDP and the general public that, at no time did Senator Usman Bayero Nafada ever come out to publicly or privately campaign for the APC Presidential candidate and he will never do so”.

It further contained that, “To put the records straight, we want to state that the trending photo was recently captured when our principal and PDP Governorship candidate, received some APC youths from Jeka-da-fari quarters of Gombe town who decamped to PDP at the White House. It was in the course of their interaction; Nafada used his two hands to call on the rowdy session to calm down”.

The organisation then called on the opposition and other detractors to find a better way of selling their candidates through issue-based campaigns and not lies and deceit, stressing that, “our detractors mischievously manipulated the photo to say that our principal’s two hands were depicting 4+4”.

It stated that, since the emergence of Senator Usman BayeroNafada as the PDP’s candidate in the state, the APC had been jittery and devising ways of denigrating him for cheap political gain, adding that “this is nothing more than the last kick of the dying horse”.

“We, in the PDP Campaign Council and the PDP in general, restate our resolve to continue to pursue and uphold the virtues and tenets of democracy by promoting peace and the development of our State and Nigeria as a whole”, the Group said.

It added that “In all our campaigns and other political gatherings, Bayero Nafada and the Campaign Council, have always been calling on our supporters to vote for the PDP from Presidential (Atiku) to the State House of Assembly candidates”.

“We are sure that if voted into power during the forthcoming general elections, Nigeria and the people of Gombe State will not regret their choice because the people will experience the execution of programmes and projects that will uplift the living standard of our people but not to be feeding the people with lies and propaganda as some opposition parties do”, the statement further contained.

“Governor Hassan Dankwambo’s administration has, within the past seven years, transformed Gombe State to an enviable status among our contemporaries and it’s only by voting Bayero Nafada that such gestures could be maintained and sustained for greater Gombe State,” Kera emphasized in the statement.