‘God is set to institute theocratic govt in Nigeria soon’ 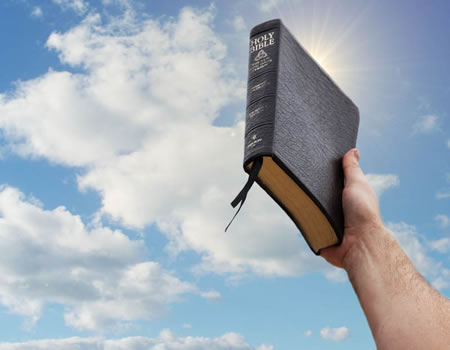 God is set to institute a theocratic system of government in Nigeria. A religious movement, the Christian Movement for Transformation of the Nigerian System of Government to Biblical Theocracy has disclosed.

Leader of the movement, Ifeanyichukwu Kelvin Lawrence, made the disclosure at a world press conference held during the week in Warri, Delta State.

He said there’d be an urgent change of the country’s name from the Federal Republic of Nigeria to the Sovereign Theocratic State of Saints (STSS) in line with a roadmap God has revealed to him.

“The transformation, according to God’s Master Plan shall occur in an open live event of national prayer contest scheduled prophetically by God to hold in Nigeria on the day of the end of the Church era, that is, on the day of the beginning of the fulfillment of the Bible End Time Prophecy of the 2,625 days (7 years 1month and 2 weeks) period of the Great Tribulation era of the earth, which is, on the day the holy city of Jerusalem in Israel is invaded by the Gentile Iranian Government Military Forces prophetically on a date not later than the year 2027 in the Gregorian calendar,” he revealed.

Pastor Ifeanyichukwu further stated that the national prayer contest would hold in the manner whereby God would direct the heart of the priests of each religion and occult/tribal shrine including church denominations in Nigeria to accept the open challenge that would be posed to them in the process of time by him.

“This is the way God Almighty will personally abolish the opposite religion and occult/tribal shrine including church denomination of opposition whose sacred items or logo are consumed by God Almighty Himself with the fire from the clouds in the sight of the general public.

“And the priest of the religion or of the occult/tribal shrine or of the church denomination whom God Almighty shall answer his prayer in that regard in the sight of the general public shall automatically become the Supreme Leader that is chosen directly by God Almighty Himself to lead Nigeria with supernatural ability to implement the fundamental objectives urgently required by God Almighty to bring peace and prosperity with praise to God’s Holy Name in Nigeria,” he reiterated.

According to him, the rationality of God for transformation of the Nigerian system of government to Biblical Theocracy is to make Nigeria the camp of the saints besides Israel where the Gentile Christian and Messianic Jewish saints of God across the globe shall seek refuge of God in the face of horrendous persecution of the Saints at the end of the Church era.

The cleric urged the Nigerian authorities to find enduring solutions to the lingering problems of terrorism, killer herdsmen, banditry and the IPOB separatist struggle across the country, noting that Nigeria will not know peace unless government handles the issues with utmost care.