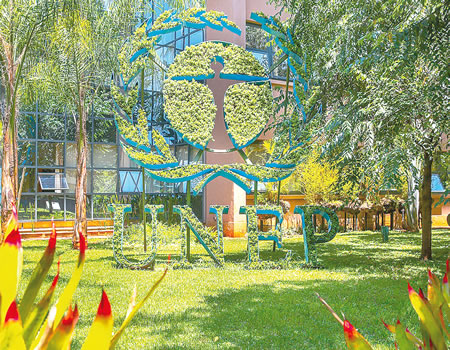 Global food system is the primary driver of biodiversity loss, with agriculture alone being the identified threat to 24,000 of the 28,000 (86%) species at risk of extinction. The global rate of species extinction today is higher than the average rate over the past 10 million years.

In the last decades our food systems have been following the “cheaper food paradigm”, with a goal of producing more food at lower costs through increasing inputs such as fertilisers, pesticides, energy, land and water. This paradigm leads to a vicious circle: the lower cost of food production creates a bigger demand for food that must also be produced at a lower cost through more intensification and further land clearance.

The impacts of producing more food at a lower cost are not limited to biodiversity loss. The global food system is a major driver of climate change, accounting for around 30 per cent of total human-produced emissions.

According to the new report, a reform of food systems is a matter of urgency and should focus on three interdependent actions:

Firstly, global dietary patterns need to move towards more plant-heavy diets, mainly due to the disproportionate impact of animal agriculture on biodiversity, land use and the environment. Such a shift, coupled with the reduction of global food waste, would reduce demand and the pressure on the environment and land, benefit the health of populations around the world, and help reduce the risk of pandemics.

Secondly, more land needs to be protected and set aside for nature. The greatest gains for biodiversity will occur when we preserve or restore whole ecosystems. Therefore, the world needs to avoid converting land for agriculture. Human dietary shifts are essential in order to preserve existing native ecosystems and restore those that have been removed or degraded.

Thirdly, the need to farm in a more nature-friendly, biodiversity-supporting way, limiting the use of inputs and replacing monoculture with polyculture farming practices.

Dietary change is necessary to enable land to be returned to nature, and to allow widespread adoption of nature-friendly farming without increasing the pressure to convert natural land to agriculture. The more the first action is taken up in the form of dietary change, the more scope there is for the second and third actions.

The findings and recommendations of the new Chatham House report were presented during an online event which included speakers from UNEP, Chatham House and Compassion in World Farming, as well as Jane Goodall, PhD, DBE, Founder – the Jane Goodall Institute & UN Messenger of Peace.

Susan Gardner, Director of UNEP’s Ecosystems Division, said, “Our current food system is a double edged sword – shaped by decades of the “cheaper food” paradigm, aimed at producing more food, quickly and cheaply without taking into account the hidden costs to biodiversity and its life-supporting services – and to our own health.

Reforming the way we produce and consume food is an urgent priority – we need to change global dietary patterns, protect and set aside land for nature and farm in a more nature-friendly and biodiversity-supporting way.”

Professor Tim Benton, Research Director, Emerging Risks; Director, Energy, Environment and Resources Programme at Chatham House, said, “The biggest threats to biodiversity arise from exploitative land use – converting natural habitats to agriculture and farming land intensively – and these are driven by the economic demand for producing ever more calorie-rich, but nutritionally poor, food from fewer and fewer commodities grown at scale.

These commodities underpin a wasteful food system that fails to nourish us and undermines biodiversity and drives climate change.”

The North and its elders

The one man, one gun proposal