Girl,17, arrested for faking own kidnap in Ogun 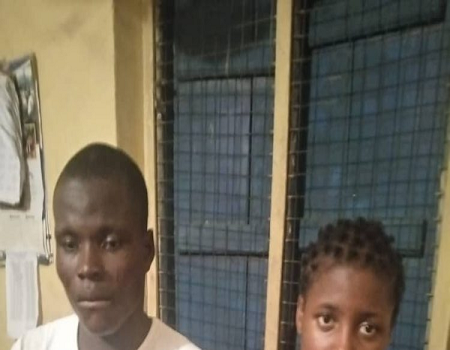 A 17-year-old girl, Seun Adekunle, has been arrested by men of the Ogun State Police Command for faking her own kidnap.

Her mother, Bukola Adekunle, had reported at the Enugada Police Station, that her daughter, who left home on Monday, on an errand to Lafenwa area of Abeokuta, had been found missing.

The woman said she received a phone call from an unknown person that her daughter had been kidnapped, demanding N500, 000 as ransom.

Mrs Adekunle said the caller warned her not to report the matter to the police if she wanted her daughter alive.

In a statement by the Police Public Relations Officer, Abimbola Oyeyemi, the DPO of Enugada Station, Baba Hamzat, and his men swung into action and arrested the girl and her 25-year-old boyfriend, Basit Olasunkanmi,, at their hideout.

It was gathered that Olasunkanmi, a butcher, lured the young girl into the act because he was in need of money.

Meanwhile, the State Commissioner of Police, Kenneth Ebrimson, ordered that the case be transferred to the investigation and intelligence department of the Police for further investigation.

Police Give Account Of How 21 People Were Killed In 2 LGs In Zamfara
Zamfara State police command has said 21 people were killed in attacks carried out in two local government areas of the state. This was contained in a statement signed by the police image-maker… Girl Girl Girl GirlRead full story

COVID-19: How we discovered 104 positive cases in a company ― Ogun govt