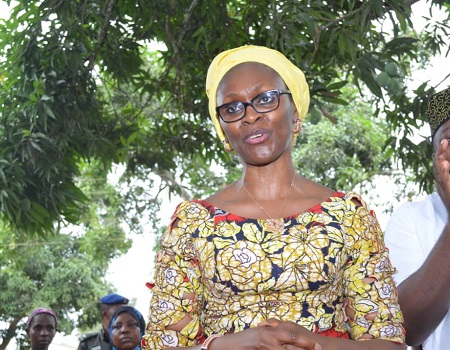 THE wife of Ogun governor, Mrs Bamidele Abiodun, has warned against child marriage, saying it has negative effects on the socio-economic development of the society.

Abiodun gave the warning on Monday in Iperu while hosting members of the Family Health Initiative, a Non-Government Organisation.

She also frowned at early pregnancy, saying it had kept most girls out of school and making them vulnerable.

Expressing her interest in ante-natal care to reduce maternal mortality during childbirth, she noted that the government should be more concerned about the health of its citizens.

“It has become imperative for any government to place a high premium on the health of families in the state.

“Our government would no longer watch children and women die of avoidable health conditions,” she said.

The governor’s wife assured the NGO of government’s support, urging it to partner with the present administration toward promoting healthcare.

The Secretary of the group, Rev. Olajide Odugbemi, enjoined the government to prioritise the provision of consumables in primary health care centres, adding that this would further make health care delivery more affordable.

Another member of the organisation, Dr Bunmi Ojelade, described family planning as an effective intervention that could help reduce child and maternal mortality.

She called on the government to put in place a veritable feedback mechanism for sustainable healthcare delivery in the state.

The News Agency of Nigeria (NAN) reports that in recognition of her role in rendering assistance to the girl-child, Abiodun was decorated as the Patron of the Nigerian Girls Guide Association, Ogun chapter.