• Says his administration enrols 140,000 out- of- school children 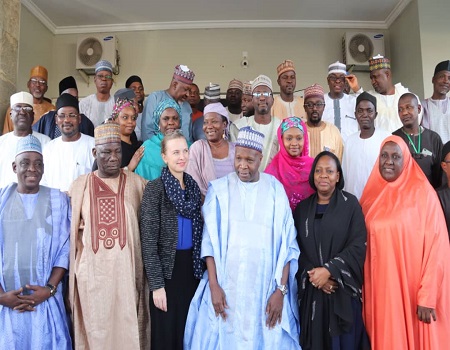 United Nations Population Fund (UNFPA), as well as the Norwegian Government, have been commended for supporting girl-child education and implementing other healthcare programmes in Gombe State just as the State has enrolled 140,000 out- of- school children back to school.

The commendation was given by Gombe State Governor, Muhammadu Inuwa Yahaya while receiving in audience a joint UNFPA/ Norwegian Government delegation on a courtesy visit at the government house on Friday.

Inuwa Yahaya expressed satisfaction with the UNFPA supported projects’ impact in improving the lives of women and children, girl- child education, gender equality and succour to the displaced persons.

He noted that the influx of displaced persons from insurgency ravaged states of Adamawa, Borno and Yobe states have overstretched the numerous public facilities in Gombe state, as such more needs to be done by both government and partners to address the problems.

The Governor said that “Donor agencies and development partners have wonderfully done well in Gombe state but I still urge them to do more so as to strengthen us in accommodating the displaced persons, because they are Nigerians and must be accommodated no matter what, considering the circumstance that led to their relocation from their immediate communities and ancestral homes”.

He, however, lamented that many development partners do not see Gombe as one of the frontline states in the North East, stating however that the impact of insurgency in the state is glaring considering the continuous influx of the displaced persons into the state some of whom have already made up their minds not to go back to their states.

Inuwa Yahaya revealed that Gombe state government in a joint effort with the World Bank-supported Better Education Service Delivery for All project (BESDA) was able to mop up about 140.000 of the 550,000 recorded out- of- school children in the state from the month of August- December 2019.

He said that “By the records of United Nations Children Fund(UNICEF), Gombe State alone has over 550, 000 out-of-school children but I believe we have more and 60 to 70 per cent of them are girls”.

“ As a result of efforts made between August and the end of December last year, we were able to enrol 140, 000 children but that is not enough. Retaining and giving them quality education to uplift their lives, is key,” the Governor stated.

He then stressed that his administration is addressing the huge infrastructural deficit in the education sector, while also putting efforts towards revamping the sector and improving the quality of education at all levels.

Earlier in their separate remarks, the UNFPA Deputy Representative, Erika Godson and the First Secretary, Norway Embassy, Mari Lundeby commended Gombe state Governor for his commitment in addressing maternal health and other development issues while restating resolve towards enhancing girl-child education and working with the state in addressing high maternal mortality rates among other challenges.

They assured that they will continue to support the good initiatives of the government which are geared towards improving lives of the people urging the Governor to keep up the good things he is doing as contained in a statement by Ismaila Uba Misilli, Senior Special Assistant Media and Publicity to the Governor.

Ifeoma, survivor of 2002 Lagos armoury explosion, celebrates 18 years after, reaches out to Atiku