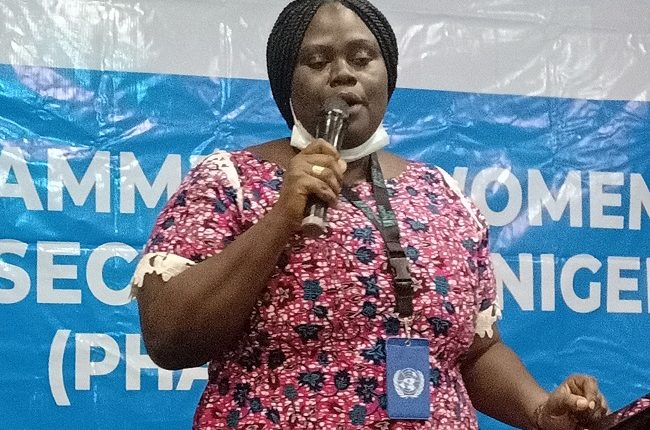 It has been lamented that in spite of the rigorous efforts, education and sensitization on the need to stop gender discrimination against women, the political participation of women in the country has remained disappointedly low, at below 4 percent.

The lamentation was made by the National Programme Coordinator, Women Peace and Security of UN Women in Nigeria, Bukola Ademola-Adelehin while giving opening remarks during a stakeholder meeting on Programme on Women Peace & Security in Nigeria (Phase II) held at Chartwell Hotel, Bauchi on Monday.

She expressed that women and girls in Nigeria have continued to be relegated to the background particularly in decision making in spite of the fact that they are directly affected by such decisions.

She further said that, “though Nigeria signed all the relevant UN resolutions as they affect women and children, such resolutions have been set aside by policy implementers thereby subjecting women and girls to discrimination and gender inequality.

Bukola Ademola-Adelehin added that the UN Women which was established immediately after World War II, is working assiduously to ensure that women and girls took their proper positions in the scheme of things.

She also said that, boys too are not left out in the discrimination as many of them are forced to join militant groups such as Boko Haram and others against their wish a development she opined has really set the country back negatively.

The UN Women official stressed that the organization will continue to propagate the cause of women, girls and indeed boy children in ensuring that no one is left behind in the scheme of things particularly political participation.

She expressed happiness that the Phase II of the UN Women programme has begun in order to consolidate the gains of the Phase I appealing to all stakeholders to support the programme in Bauchi state.

She also commended Bauchi State for actively participating in the programme of the UN Women through the various initiatives which have carried women along for effective participation.