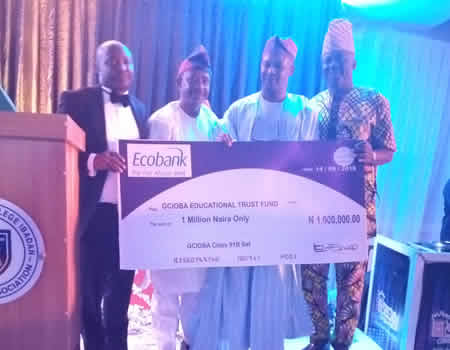 The Government College Ibadan (GCI) Class of 91, has rewarded the best teacher and three top students of the school at its reunion programme held in Ibadan.

Giving the keynote speech at the event that took place at Jogor events centre, Ibadan, on Saturday, Dr Bolanle Babalakin urged the 91 set to remain united and committed to the growth of their alma mater.

Babalakin, the National President of the Government College Old Boys Association(GCIOBA), who was represented by Tola Obembe commended the set for their tremendous contributions to the growth of the school, just as he urged them not to forget the departed souls of the set.

In his anniversary message, the set Chairman, Government College Ibadan Class of 91, Mr Kolade Enitinwa, enumerated the milestones the set had recorded, especially within the one year of his administration as the set chairman.

Entinwa also pledged the commitment of the set to continue to make the school remain a pride for everyone.

“Inspite of the modest achievements recorded in just a year, I pledge the avowed commitment of my exco to carry on with the onerous task in ensuring that GCI remains as always, the school of our pride,” he said.

Meanwhile, the set, at the occasion launched a Group Life Insurance Scheme for the set and as well, awarded the best students and best teacher of the GCI.

Mr Oyesiji Peter, who got the best teacher prize was awarded a sum of 50,000, while Adegbite David and Kolawole Emmanuel got a PC tablet each for emerging the second runner up, first runner, while Ifeanyi Kelechi, who won the prize for the best student of GCI was also presented with a tablet.

The Class 91 set also disclosed that both UTME and WAEC forms of the students have been catered for.

The highlight of the event was the presentation of N1 million cash to the school, as a means of supporting the school by the Class 91 set.