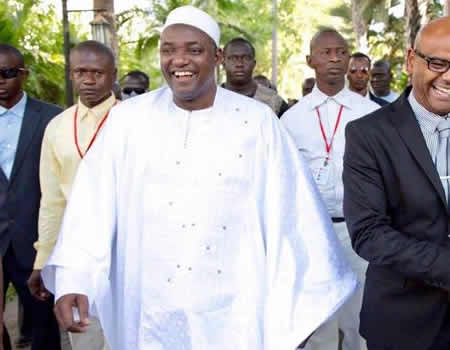 Gambia’s President Adama Barrow, is due to return to Gambia on Thursday, a senior aide Amie Bojang said on Wednesday.

Barrow who was inaugurated in neighbouring Senegal as mediators sought an exit deal for his predecessor Yayha Jammeh, on January 19.

“He is leaving tomorrow and will arrive in Banjul at around 4pm,’’ said Bojang.

It would be recalled that the ECOWAS Commission said its coalition force in The Gambia would remain for the next six months, as requested by Barrow.

Mr Marcel de Souza said this while briefing members of the diplomatic corps and partner organisations on the political situation in The Gambia on Tuesday.

De Souza, however, said that retaining troops in that country would be decided by the Chiefs of Army Staff.

The 7,000 Combat troops from Senegal, Nigeria, Mali, Ghana and other West African countries are already stationed at the border to jointly enter the country on air and by land in an operation to thwart any hostilities or breach of law in the country. The Nigerian Air force spokesperson, Group Capt. Ayodele Famuyiwa, said in a statement that the NAF dispatched a contingent of 200 men, as well as an aviation fleet comprising combat aircraft, cargo ships, a helicopter and a surveillance and reconnaissance aircraft in Dakar,”

ECOWAS had assured that military intervention will be the last resort while it attempted unsuccessfully to convince Jammeh to step down.

Civil War prevented me from graduating at UNN — Adeboye