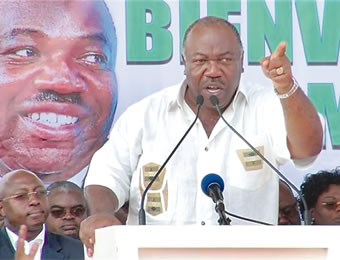 GABONESE Justice Minister Seraphim Moundounga has resigned in protest over the disputed presidential election.
He is reported to have warned the incumbent, Ali Bongo that he could cancel the results of the election if they did not “tally with reality”.
According to BBC, Mr Bongo was declared the winner by a narrow margin last Wednesday, but the opposition say the poll was fraudulent.
His rival Jean Ping has called for a general strike and says dozens of his supporters have been killed.
Mr Moundounga is the first senior government minister to resign over the election result.
The Gabonese authorities say three people have died and 105 have been injured following violent clashes and mass arrests that have taken place since the election result was announced.
Other reports put the death toll at least six.
There have been more than 800 arrests and France says several people with dual French-Gabonese citizenship remain unaccounted for.
The official election result gave Mr Bongo a second seven-year term with 49.8 per cent of the vote to Mr Ping’s 48.2 per cent – a margin of 5,594 votes.
Mr Ping won in six out of nine provinces but disputes the result in Mr Bongo’s home province of Haut-Ogooue, where turnout was 99.93 per cent and 95 per cent of votes were for the president.
Turnout in the other provinces was between 45 per cent and 71per cent, according to Gabon’s interior ministry.
The former African Union diplomat has called for a recount, which has so far been resisted by the government.
Oil-rich Gabon has one of the highest per-capita incomes in Africa, but few of its 1.6 million people feel the benefit.