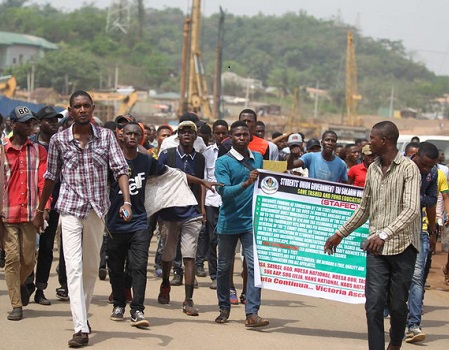 FESSU, which is the umbrella body of all Ekiti State indigenous students also urged Governor Fayemi to prosecute men of the Nigeria Police found culpable in the Tuesday attack.

Tribune Online recalls that the students had embarked on a peaceful protest to press home their demand for improved electricity supply in their campus community when they sighted the convoy of Mrs Fayemi.

The students were said to have blocked the road. Efforts by policemen attached to the security detail of the governor’s wife, Erelu Bisi Fayemi, to disperse the protesters led to the death of two students while other students sustained various degrees of injuries.

Top government officials led by the Secretary to the state government, Biodun Oyebanji paid a condolence visit to the families of the deceased on Friday.

FESSU, however, said it found such visit as an avenue to “shed crocodile tears” as it lacked “essential nutrients of compensation for the families of the deceased” as the union had earlier demanded from the state government.

“The union employs this medium to expressly charge the state government to as a matter of importance pronounce compensation for the families of the deceased, take responsibilities of the hospital bills of the two poor students in critical health conditions.

“Ensure the unconditional release of the students in detention and ensure that justice is meted on the officers of the Nigeria Police Force who were involved in the attack that has brought about heated atmosphere in our dear state.

“It is important to state that following the press release of the Union on 11th September, 2019, our union’s PRO was detained unlawfully for over 24 hours by the Ekiti State Police boss while one of the students arrested has been released on conditions while others are still detained and to be arraigned before a court next week.”

The union warned that failure to meet these demands; it would call its members from various Local Governments of Ekiti State and outside the state “for mass display of displeasure.”