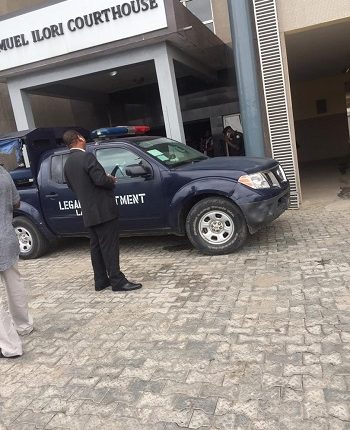 Both, have been taken to court for trial, according to the command PRO, Bala Elkana.

Akindele’s husband reportedly submitted to the police at about 2:00 am this morning, following the threat to declare him wanted for violating the coronavirus epidemic lockdown in Lagos State.

They were charged for breaching the Lagos Infection Diseases Regulations 2020 (the Regulations) which prescribes a jail term of one month or N100,000 fine or both for persons found guilty of hosting gatherings or flouting the lockdown order.

“Where the arrested person is found guilty, the person is liable to a fine of N100,000.00 or one-month imprisonment or three months Community service.”

The police arrested the popular actress on Sunday evening for hosting a party in honour of her husband.

Her husband, popularly known as JJC Skillz and a controversial singer Naira Marley was also mentioned as persons of interest.

As at the time they left the car for proper hearing at the court, they covered their faces from the point of leaving the car to the courtroom and journalists were barred from covering the case.

Police arrest man for defiling, raping 19-year-old daughter since she was 11