Fuel scarcity looms as IPMAN, others threaten to shut down depot 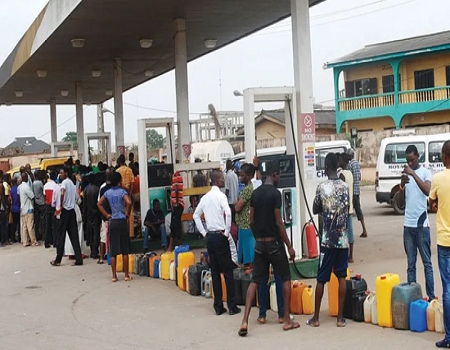 The Independent Petroleum Marketers Association of Nigeria (IPMAN), Petroleum Tanker Drivers( PTD) and Independent Marketers Branch (IMB), have threatened to shut down the Mosimi depot of the Nigerian National Petroleum Corporation (NNPC) if the Federal Government fails to grant express approval for the reconstruction of the Sagamu-Mosinmi-Ogijo-Ikorodu road.

The unions, said the highway, has been long abandoned by the government and therefore again appealed to the Federal to as a matter of urgency begin the total reconstruction of Sagamu- Mosinmi-Ogijo-Ikorodu road.

The chairmen of the oil and gas unions at the Chief Femi Adelaja (IPMAN); Olasunkanmi Sodipo (IMB) and Alhaji Ganiyu Adurogangan respectively, who led a peaceful protest, on the road, on Tuesday, issued a seven -day ultimatum to FG to grant express approval for the reconstruction of the road, saying the depot would be shut down if government fails to attend to the road while the ultimatum lasted.

The leaders who spoke with newsmen said their unions could no longer provide palliative measures on the highway.

Adelaja noted that IPMAN and other unions have been using their funds to carry out the palliative measure on the road to make it passable.

He said that oil marketers are no longer patronising the depot because of its deplorable state which according to him had adversely affected their businesses.

“This road has great economic value to the purse of the FG because it housed so many big industries apart from NNPC. This road is critical to our businesses.

” We will not hesitate to shut down this depot and this may lead to fuel scarcity in some states of the South West. We don’t want this matyer to degenerate to that level, that is why we are here now appealing to the FG,” the IPMAN boss said.

Sodipo and Adurogangan in their separate submissions said the highway had become a death trap.

They appealed to the FG to concession the road to the Ogun State government for reconstruction.

“The FG should allow the Ogun State Government to reconstruct this major road with many economic value. We don’t mind paying toll fees if the road is constructed by the state.Please help us out to bring Mosimi to its best condition,’ Sodipo.