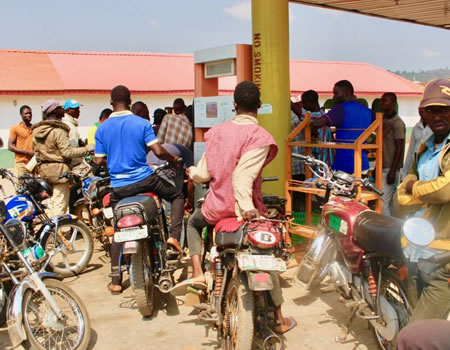 Residents of Akure, the Ondo state capital on Saturday, resumed queuing at the filling stations for  Premium Motor Spirit  (PMS) also known as petrol as the scarcity of the product looms in the state.

Many of the fuel stations are under lock and key while the few ones who are selling the product were filled up with vehicles and causing traffic gridlock.

Sunday Tribune correspondent noticed that most of the fuel stations selling fuel to the public were owned by major marketers, while stations owned by the independent marketers were not selling the product.

Some motorists who spoke with our correspondent lamented over the scarcity expressing the fear that the situation will add to the economic hardship being experienced by the people of the state.

A commercial driver, Wale Hosea, said he had spent over three hours at the fuel station and still waiting for the product to buy at one of the filling stations of major marketers in Akure.

” I have been on the queue for over three hours before I bought petrol this morning. The government should help us look into this matter before it grounds the whole country,” he said

Amoo said  ” The product is not available at the depots, so we have to buy from the private depots, which is more expensive. We bought for N139 per litre from the depots excluding other expenses we incur before landing it at the petrol station, so it may

“That is why we are  having the scarcity, we don’t have enough products in the country but believe it will soon be resolved.”