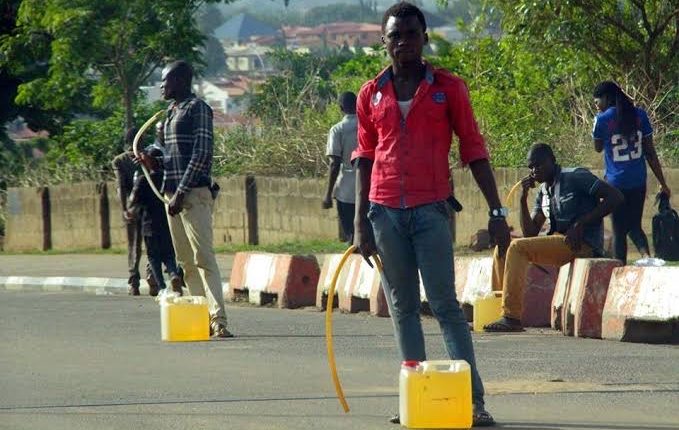 Most petrol filling stations in Kogi State have closed down for business as a result of non-availability of petroleum products.

Tribune Online gathered that most of the major marketers preferred to offload the product to some of the black marketers so that they can make a big profit.

At black market, petrol is been sold at the rate of N350 and N400 per liter along major streets in Lokoja while some filling petrol stations that have fuel sell at N200 per liter to motorist.

However, a group under the aegis of Arise for Good Governance has called on President Muhammadu Buhari to as a matter of urgency revert the recent astronomical increase in the fuel pump price in the interest of peace and welfare of Nigerians.

The Kogi State coordinator of the group, Hon. Solomon Andrew Agada who made the call while speaking with Tribune Online on the development, wondered why government who is aware of the current precarious situation the masses are passing through as a result of quantum insecurity and the effect of covid-19 pandemic decided to unleashed more suffering on the people through the adjustment of the petrol pump price.

Agada who was visibly angry throughout the period of the press conference, said Nigerians are rejecting the increment in its entirety, noting that the hardship caused by  the adjustment of the pump price within few days of its announcement was beyond endurance.

“Enough is enough to this non challant attitude of the federal government toward the plight of Nigerians even in the face of covid-19 that has crippled many businesses in the country.

“It is evidently clear that Nigeria is one the largest producer of crude oil in the world and we can not afford to eschew the maladministration of President Buhari’s  administration on issue of fuel price increment.

“Today banditry, kidnapping, Boko Haram and other heinous crimes have taken over the country leaving the citizens in a perpetual fear and agony and yet government seems not sincere on the fight to tackle the menace of security challenges in the country .

“Despite these series of challenges , the federal government without recourse for the welfare of the people increase the fuel pump price to N212:60k per litre, this is not acceptable.

“The Arise for Good Governance with its branches across the 36 states have vehemently opposed this decision of fuel price  increase and we will not leave any stone unturn to mobilize ourselves and protest across the country until  President Muhammadu Buhari remove the new pump price of petrol” he warned.

He appealed to the National Assembly and other critical stakeholders in the governance of the country to prevail on  President Buhari to jettison any form of increment in petroleum products, saying there is no justification to take such decision at this critical period.

“We are also warning those giving the president ill  advise to desist in the interest of the masses because the future of this country is already at the verge of collapse as many schools are force the close due to intense security challenges.

“The President has a lot of issues to attend to at the moment and increasing the pump price is not the best option right now and we will not relent on our oars until president Buhari revert the pump price,” he stated.