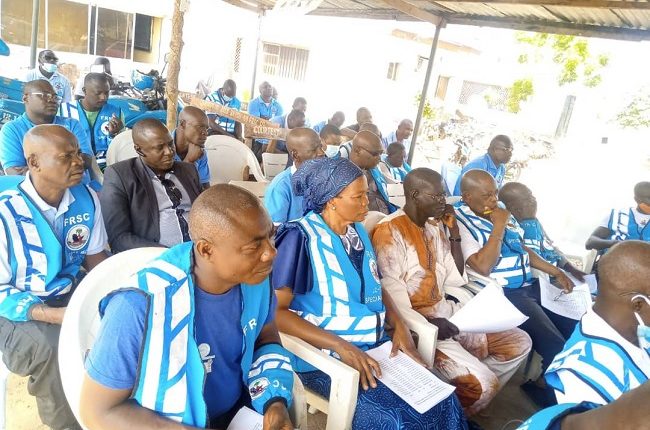 Private car owners who use stickers, bannerets and other insignia of the Special Marshall of the Federal Roads Safety Corps (FRSC) on their cars knowing that they are not members have been warned to forthwith stop or face prosecution when arrested.

The warning was given by the Bauchi State Coordinator of the Special Marshall, Dr Kunle Gbadamosi while addressing Special Marshall during their monthly meeting and end of the year congress held over the weekend at the Base of FRSC, Bauchi Sector Command.

Kunle Gbadamosi frowned at the indiscriminate use of the insignia of the Special Marshall by many car owners using such to flout traffic rules thereby giving the Corps a bad image as well as setting bad examples for other road users.

He warned that, “henceforth, anyone caught who is not a Special Marshall either in Bauchi Sector Command or any other Command, will be arrested, the vehicle impounded until the required fines were paid as outlined in the rules and laws Governing the Corps”.

He said that, “Such member will be demarshalled, fined and delisted from the membership of the Marshall in accordance with the law of the Corps”.

While decorating new members, the State Coordinator urged them to always be ready to save lives and reduce road crashes because according to him, “your major activity is saving lives and reducing crashes on the roads anytime, anywhere and anyhow”.

He informed the Special Marshall to brace up for the activities of the ‘Ember’ months particularly during the Yuletide and New Year festivals when the volume of traffic is expected to double saying, “you have to sacrifice your comfort during the celebration in order for the roads to be safe and traffic flow freely”.

Kunle Gbadamosi enjoined members who will be travelling during the period to go along with their regalia and other kits to enable them to join in operation anywhere such is required urging them however to be security conscious and always watch their backs considering the insecurity across the country.