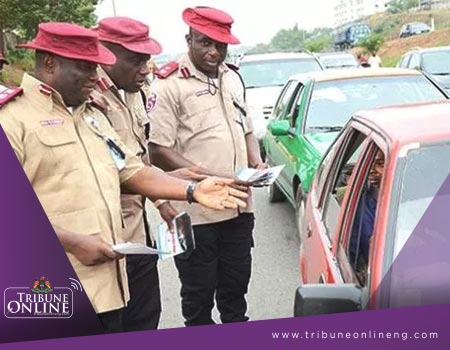 VEHICLE owners have been urged to always ensure their proper registration against theft. Speaking while presenting a stolen vehicle recovered by the Operatives of the State Command of the Federal Road Safety Corps (FRSC) in Awka, the state Sector Commander, Mr Sunday Ajayi said they were able to secure the vehicle because it was properly registered.

According to Ajayi, in the course of carrying out their routine enforcement on the road, officers of the corps encountered a driver who was not on seat belt and when contravened, it was discovered that he had no licence nor vehicle documents and the vehicle was impounded.

Ajayi, said the process of investigation, the driver escaped and abandoned the vehicle, and through the corps database, it was discovered that the bus was stolen from Ebonyi State and the genuine owner was later identified who confirmed that the vehicle was stolen from where it was parked on Twenty-seventh April this year.

The State Sector Commander urged vehicle owners to personally get involved in the registration exercise by going through the laid down processes to ensure that their profile and all necessary details are captured in the Federal Road Safety Corps database together with other documents and number plate so that it would be easy to trace the vehicle in future if stolen.

In his reaction, the owner of the vehicle Mr Augustine Ogba from Umu-Agwa Ezaamgbo, Oha-Ukwu local government area of Ebonyi State, said he reported the theft to the nearest police station in their area when he discovered that the bus was removed by an unknown person from where it was parked close to his shop and had not seen it since then until contacted by the State Command of the FRSC on the recovery.

Mr Ogba charged vehicle owners to ensure that their vehicles are properly registered to safeguard it.

Lead us out of APC, Kwara party leaders tell Saraki