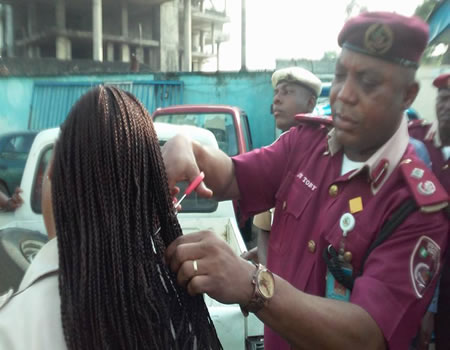 In an SMS to the News Agency of Nigeria (NAN) on Tuesday, spokesman for the corps, Mr Bisi Kazeem, said other officers concerned were also recalled.

Photos circulating on social media showed Kumapayi using a pair of scissors to cut the hair of some female personnel as alleged punishment for wearing long hairdo.

The incident reportedly took place during the routine early morning parade in Port-Harcourt, the state capital, when the sector commander went round to inspect his officers.

Kazeem said the recall became necessary to pave way for investigation into the matter.

He debunked a report by an online news medium that Kumapayi had been suspended, saying “it is a recall, not suspension.”

Meanwhile, the FRSC has deployed 25,000 regular and special marshals for the Easter special patrol which will commence on Thursday, April 13 through April 18.

Oyeyemi, who approved the deployment, said this would ensure free flow of traffic in anticipation of mass movement of people and goods across the length and breadth of the  country during festive seasons.

Kazeem, in a statement on Tuesday, in Abuja, said the corps had also deployed 869 patrol vehicles, 267 motorbikes, 106 ambulances and 22 tow trucks for the special patrol.

No going back on planned enforcement of new drivers’ licence, plate numbers- FRSC