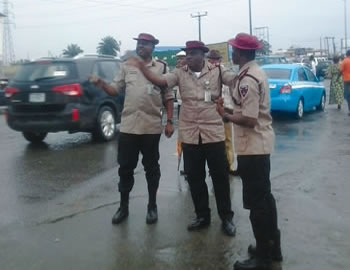 The Federal Road Safety Corps (FRSC) has commenced 2019 Eid el Fitr special patrol with the deployment of 36,000 of their personnel.

Corps Public Education Officer, FRSC, Mr Bisi Kazeem in a statement issued in Abuja on Friday, said this was in line with its tradition of organising special patrols during festive periods to avert road obstructions, crashes and deaths due to heightened traffic movement.

He noted that the special patrol was to put necessary measures in place to ensure that the 2019 Eid el Fitr celebration expected to take place early next week is observed under an atmosphere of peace, safety and free movement of people and vehicles across the country.

Kazeem further stated that the special operation was to ensure the free flow of traffic, provide prompt rescue services and timely clearance of obstructions on all major roads and critical corridors across the country during and after the festive period as well as minimising the occurrence of road traffic crashes on the nation’s highways.

He added that the focus would be on light sign violation, overloading violation, driver licence violation, fake/expired; lane indiscipline, removal of rickety vehicles on the roads and other obstructions as well as driving with expired/worn out tyre and without a spare tyre.

He revealed that in order to ensure the effectiveness of the operations, 52 critical corridors across the country have been identified to be covered within the period while commanding officers operating along such corridors were given specific directives to ensure that the routes are properly manned.

He added that as part of the strategies, mobile courts would also be in full sitting to promptly try traffic violations.

The FRSC spokesman enjoined all motorists to cooperate with the personnel of the Corps and other security agencies who would be engaged in traffic management to ensure free movement of traffic.

He said: “The special operation would last from 31 May to 8 June 2019 with the active participation of regular and special marshals while monitors from the FRSC National Headquarters Abuja would be deployed to Field Commands to ensure compliance to the operational order.

“The Corps Marshal of FRSC of the FRSC, Dr Boboye Oyeyemi is the overall Commander of the special patrol.”