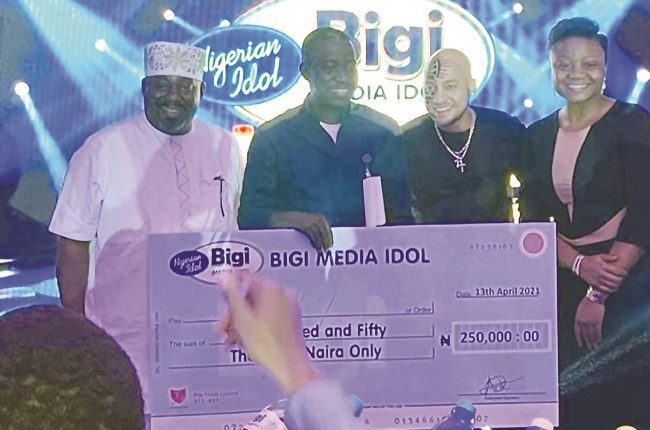 Nigerian Tribune entertainment anchor and editor of the Friday Treat column, Rotimi Ige, has emerged the winner of the maiden edition of the Bigi Media Idol, a replica of the Nigerian Idol reality TV show sponsored by Rite Foods, billed to start next week.

The management of Rite foods, in their statement said they decided to hold the ‘Media Idol’ event to put journalists in the spotlight, so they could experience first hand, what real contestants on the Idol experience.

For Ige, he had to beat nine other contestants in a singing competition before judges Obi Asika and DJ Sose, to emerge winner of the keenly contested competition, which held at the Radisson Blu hotel, Ikeja, Lagos on Tuesday.

According to the judges, his choice of songs, namely ‘Olufunmi’ by Styl Plus, ‘I wanna know’ by Joe and ‘African Queen’ by 2baba, put him ahead of the competition, coupled with his stage charisma and crowd pulling performances.

In addition to the win, the CEO of travel and tours agency, UFITFLY, Evangelist Ajibola Ogunkeyede, rewarded Rotimi Ige with an all-expense paid trip to Dubai and Kenya scheduled for July.

In spite of the huge investment in the water sector by the government and international organisations, water scarcity has grown to become a perennial nightmare for residents of Abeokuta, the Ogun State capital. This report x-rays the lives and experiences of residents in getting clean, potable and affordable water amidst the surge of COVID-19 cases in the state…Friday Treat anchor  Friday Treat anchor

The Lagos-Ibadan railway was inaugurated recently for a full paid operation by the Nigerian Railway Corporation after about a year of free test-run. Our reporter joined the train to and fro Lagos from Ibadan and tells his experience in this report…Friday Treat anchor  Friday Treat anchor

‘Religion not Nigerians’ problem, it’s the only thing keeping us’