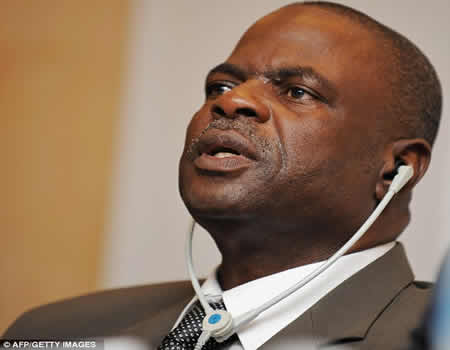 NIGERIA’S   Amos Adamu was on Tuesday handed a fresh sanction by world football-governing body, FIFA, as the adjudicatory chamber of the Independent Ethics Committee banned him for two years from taking part in any kind of football-related activity at national and international levels.

Adamu, who was then a member of the then FIFA Executive Committee, alongside another member of the committer, Reynald Tamarii was on 17 November, 2010 suspended from participating in any football-related activities, including administrative, among others, for three years by the world body’s Ethics Committee, under the chairmanship of Claudio Sulser, after examining their cases in relation to the bidding process for the 2018 and 2022 FIFA World Cups.

According to a statement made available to Tribunesport by the Independent Ethics Committee of the world football-governing body on Tuesday, investigation of Adamu was conducted by Dr Cornel Borbély, chairman of the investigatory chamber of the Ethics Committee, which resulted in a final report being submitted to the adjudicatory chamber on 2 December, 2016. Adjudicatory proceedings were formally opened on 20 December 2016.

The adjudicatory chamber, which was chaired by Hans-Joachim Eckert, determined that, through his involvement in the organisation of an event in 2010, while being a member of the (then) FIFA Executive Committee, Adamu, who was a one-time chairman, West African Football Union (WAFU), violated articles 13 (General rules of conduct), 15 (Loyalty) and 19 (Conflicts of interest) of the FIFA Code of Ethics.

It added that sanction is effective from 28 February, 2017, the date on which this decision was notified.

While reacting, Dr Adamu said the ban was political, which he said did not move him a bit.

“It is all politics, when you understand that, you won’t be bothered. Issa Hayatou had said that he would not hand over to anybody except me. The last time you remember election was just three months away when they banned me. It was to be held in Sudan. Then Hayatou said he would not retire. Now about two months to the election in Ethiopia [from December 2016], they started again, now they said they have banned me. They were thinking Hayatou could do something else.

“I have moved ahead, when they invited me for Cup of Nations in Gabon, I refused to attend.”

Mallam Adamu Adamu, get ASUU to call off this strike