Four Nigerian jailed in UK after hurling faeces at sailors, vowing to infect them with HIV

Share
Four Nigerian stowaways have been jailed for a total of seven years after hurling faeces at elite SBS sailors and vowing to infect them with HIV during a tense stand-off in the Thames Estuary.
ALSO READ:
Business News

The stowaways also threatened to kill crew members and armed themselves with metal poles when they broke free from quarantine on the 78,000-tonne Italian merchant ship on 21 December 2018 and said they would steer it to the UK, Daily Mail reported.

Helicopters with specialist sailors were sent to rescue the Grande Tema’s crew and arrest the men while the ship floated off the Essex coast.

Samuel Jolumi, 27, Ishola Sunday, 28, Toheeb Popoola, 27, and Joberto McGee, 21, were all found guilty of affray after an eight-week trial in the Old Bailey. Popoola and McGee were also found guilty of making threats to kill.

All were cleared of attempting to hijack the ship.

The group was found by the captain days after the vessel set sail from Lagos, Nigeria, and placed in quarantine before they mutinied five days later. 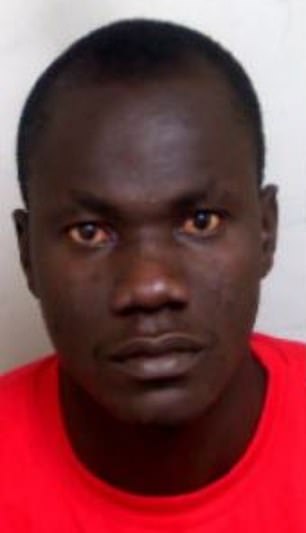 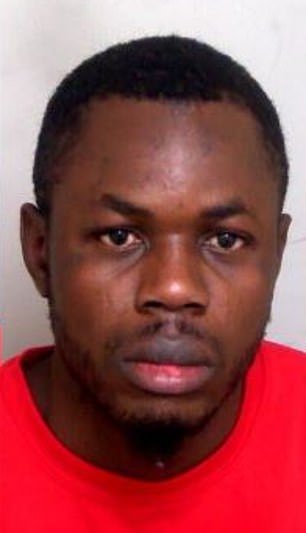 Samuel Jolumi, 27, (left) and Ishola Sunday, 28, (right) are two of four Nigerians that have been jailed after throwing faeces at sailors and threatening to infect them with HIV after breaking free from quarantine in a merchant vessel off the Essex coast 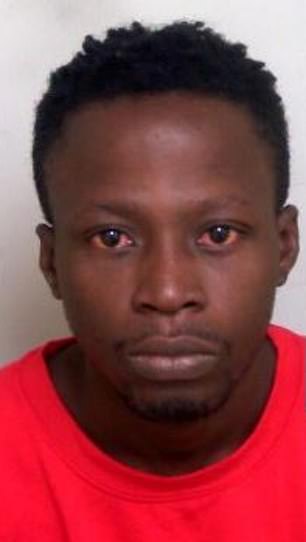 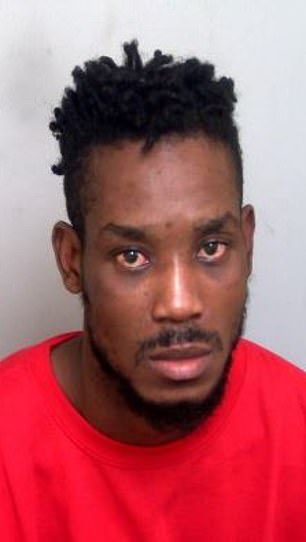 Toheeb Popoola, 27, (left) and Joberto McGee, 21, (right) were found guilty of affray along with Jolumi and Sunday. Popoola and McGee were also found guilty of making threats to kill

At least one member of the group made ‘throat-slitting’ gestures at the 27-strong crew and McGee mouthed the words: ‘I kill you’.

Faeces was also smeared across the windows of the cabin that the crew had barricaded themselves into.

The grim gestures can be seen in CCTV footage played to the court, while the stowaways can also be seen threatening to break the glass of the cabin and steer the ship to the UK unless the captain did so before 6am.

A second clip also shows Poopola charging at the window of the bridge, while the other three roam the upper decks brandishing litre-bottles of their own urine.

Two of the stowaways were caught by sailors while foraging on the upper deck, while Italian captain Antonio Raggi found the other two hanging over the railings near the ship’s propellers in dangerous waters.

They were welcome with smiles by the crew, offered food and placed into quarantine, but rebelled five days later as the ship approached Britain.

A tense 14-hour stand-off ensued on 21 December 2018 before special forces boarded the ship under cover of darkness and arrested the stowaways. 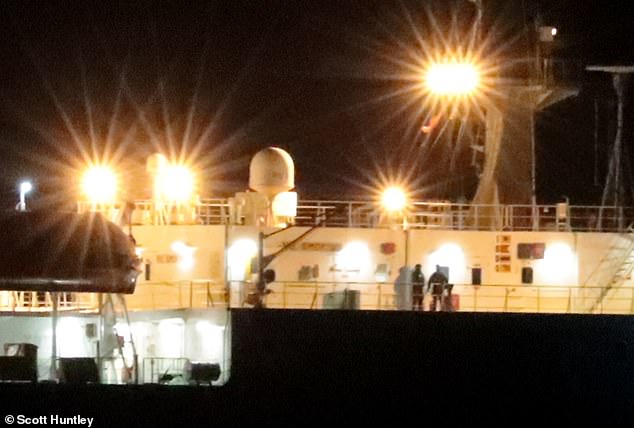 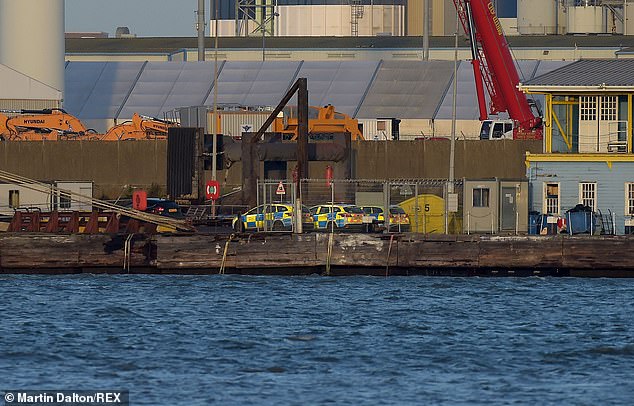 A tense 14-hour stand-off ensued on the Grande Tema after the four men broke free. CCTV footage shows some of them wandering the top deck holding bottles of their own urine

Popoola and McGee had previously been sent back to Nigeria after stowing away on separate ships, while Sunday is a married father-of-two who took a ‘chance’ decision to board the ship.

Popoola has stowed himself away three times previously, and has also applied for asylum, and McGee, who organised the riot, said he had dreams of becoming a footballer when he reached the UK.

McGee also told Essex police the ship’s crew had treated them ‘like dogs’ because ‘the food was awful’.

The force also said in a statement that the group wanted to apply for asylum for ‘a better life’.

‘As to smearing excrement on the window, he confirmed that he had done that, as he wanted them to know how serious he was,’ they added.

The captain told the court he feared the group could have been ‘terrorists’ or ‘Boko Haram’ and may have had weapons stashed on the ship. 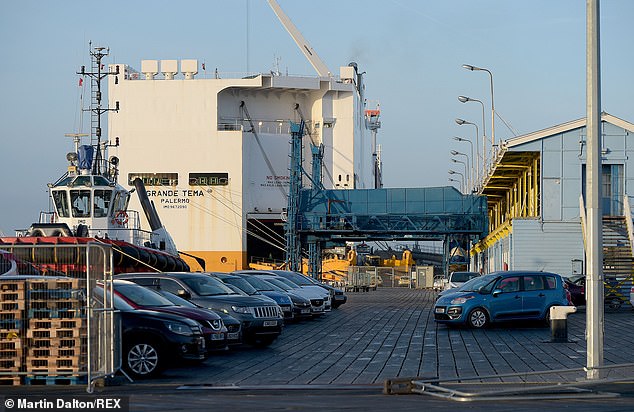 Popoola and McGee have both previously been sent back to Nigeria after being found as stowaways. Popoola has applied for asylum. Pictured above is the Grande Tema arriving at Tilbury docks in 2018 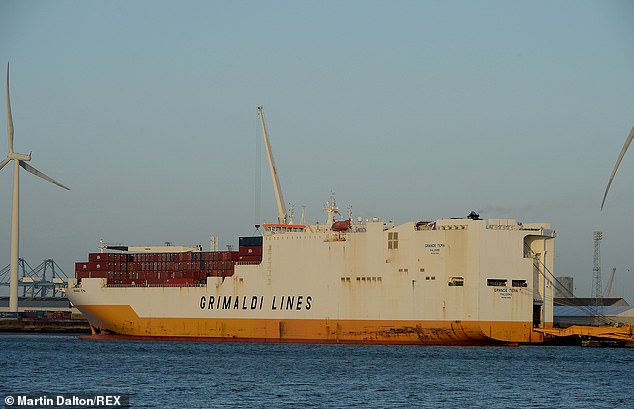 ‘In order to reinforce these demands the defendants also armed themselves with metal poles, threw urine and faeces, and in at least one of the defendant’s cases, they cut themselves.

‘The crew believed that the reason for that cut was a form of threat, that they would pass on a disease which they carried to the crew unless their demands were met.

‘Those events were, as you would expect, reported to the authorities here in the United Kingdom, and the Grande Tema was held off-shore in UK waters whilst the situation on board was resolved and the crew was no longer at risk and in danger.’

Judge Nigel Lickley QC told them: ‘You paraded about that day as a menacing group, sometimes covering your faces.

‘This is an unusual case. You were all cleared of the attempted hijacking of the ship and multiple threats kill.

‘You Popoola and McGee of one and two counts of making threats to kill. You might well have been terrorists who had secreted arms on board in advance.

‘There was serious fear or distress caused during this time to some of the crew. They feared confrontation, violence and potentially serious injury for many hours.’ 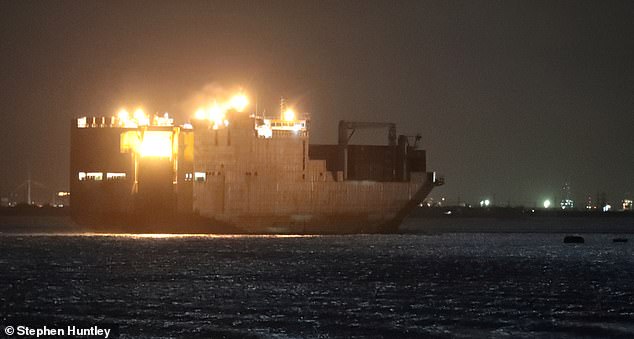 McGee also alleged to Essex police that the ship’s crew had treated them ‘like dogs’ because the food ‘was awful’. Pictured above is the Grande Tema off the Essex coast

Jolumi, Sunday, Popoola and McGee, of no fixed address, denied attempting to hijack the ship and making threats to kill.

Popoola was jailed for 31 months, while McGee was sentenced to 32 months behind bars. Sunday and Popoola were each jailed for 16 months.

They will serve half of their sentences behind bars, and may be detained for deportation proceedings.