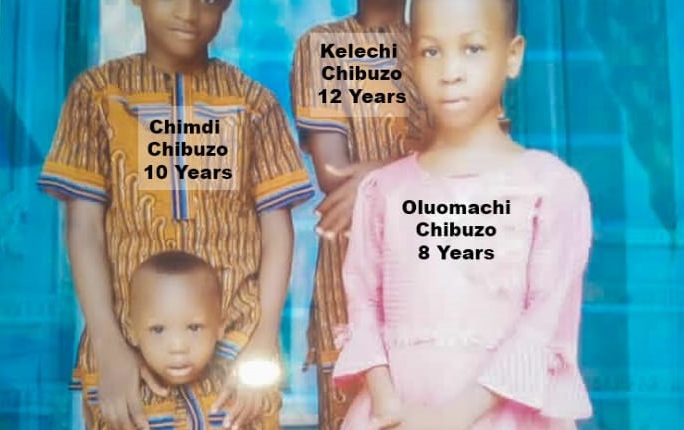 The four siblings who died after eating suya and drinking fruit juice have been buried in Umuahia, the Abia State capital.

The four kids out of seven kids of the parent lost their lives on August 25 after the meal.

The funeral ceremony which took place on Saturday was conducted by the Bishop of Goodnews Pentecostal Church Umuahia, Bishop Ugochukwu Ogbonna, who urged the grieving parents to take heart, noting that life does not lie in the hands of man.

In his speech, the President General of Ohuhu, Chief Sir Obi Aguocha, urged the parents and relatives of the kids to take heart, noting that “it is painful to wake up on the day and lose the entire family. People lose one or two, but not four. It should not happen again.”

According to him, “the children are supposed to bury their parents but their father is giving back to God what He gave to him,” disclosing that Ohuhu clan had given the family the sum of N4.8m.

Also speaking, the member representing Ikwuano/Umuahia Federal Constituency, Hon Ifeanyi Sam Onuigbo, assured that he would stand by the family at this period of their grief, praying God to grant them the fortitude to bear the great loss. He was represented by Prince Henry Eleogu.

Speaking, the father of the late kids, Chibuzo Ikwunze, revealed that autopsy results will be out in the next two weeks amidst speculations that the kids died after eating suya and juice and thanked people for their assistance in one form or the other.

There are speculations that they may have died after inhaling generator fume, which was in use near their apartment on the day of their death.

Abdulrazaq lauds Buhari over approval of neuropsychiatric hospital for Kwara

Ex-Ijaw militant who allegedly killed himself buried amid tears