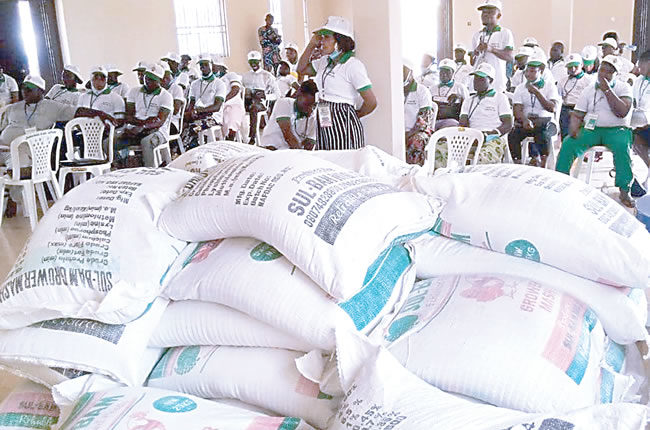 As part of her frantic efforts to alleviate poverty and reduce unemployment in the society, the former majority leader of the House of Representatives, Honourable Mulikat Akande-Adeola, recently organised the three-pronged batches of empowerment training on goat and sheep farming, fishery and snailry. The first round of the training, held on the premises of Akande-Adeola’s charity and philanthropic organisation, Jokodolu Foundation, at Aroje, Ogbomoso had participants drawn from across the 13 local government areas constituting the Oyo North senatorial district.

The subsequent trainings and empowerments also had participants drawn across the senatorial district.

Nigerian Tribune learnt that, between 2007 and now, the Kaduna-born Ogbomoso indigene, who was the first woman to hold the exalted position of the majority leader in the National Assembly in Nigeria and on the continent of Africa, had organised and trained/empowered many youths in the state on acquisition of various skills, including agriculture.

Akande-Adeola, who facilitated and organised the training in collaboration with SAMEC Nigeria Company Limited and Cocoa Research Institute of Nigeria (CRIN), told Nigeria Tribune that the idea of sheep and goat rearing occurred to her, owing to the level at which people of the senatorial district travel to far northern part of the country to procure rams and goats during festive periods.

Speaking at the end of the first batch training, Akande-Adeola, represented by Alhaji Taofiq Sakariyah, said: “I noticed that getting our people in the state involved in the rearing of sheep and goat, snailry and fishery will help our economy and, on the other hand, make them self-reliant, especially now that unemployment lingers in our society. I have touched many lives in the areas of skills acquisition, agriculture, scholarship schemes, Federal Government job opportunities for our youths, apart from different development projects I facilitated for our communities. Since I left office in 2015, I have vowed that I would devote my life to helping the people and that is why we are still here touching lives in a new dimension. We have successfully trained and empowered 250 candidates with N100,000.00 each. Next week, the next batch will come on board.”

At the training, the Executive Director of CRIN, Dr Patrick Adebola, stressed the importance of goat and sheep rearing and the economic implication of the training on the trainees and society. He said: “There is lot of importance to the training. Agriculture is basically divided into crop husbandry and animal husbandry. Sheep and goat rearing falls under animal husbandry. Today, sheep and goat rearing is very profitable. It is capable of alleviating poverty and reducing unemployment because it requires very little capital. Once you have the knowledge, the sky is your limit.”

Asked if the government is laying enough emphasis on sheep and goat rearing, Adebola stated: “Governments have been doing that and that is why Honourable Mulikat Akande-Adeola facilitated this training to empower the people of Oyo State, in order to better their lives. I, therefore, congratulate the beneficiaries and I enjoin them to imbibe what they have learnt and utilise it to better their lives.”

The training coordinator, Professor Adeboye Joseph Omole, an animal production specialist from CRIN, stressed the need to take to livestock production, especially sheep and goats. His words: “There is an improved technology recently, especially in area of feeding, breeding and disease management. That’s why you see us training them on intensive system of production instead of extensive system, which is causing problem in Nigeria. We are in an agrarian society and this training will increase beneficiaries’ sources of income and, indeed, help to alleviate poverty in the society. We’ve taught them about the best housing system, management practices, disease management and value addition. We have evaluated them. We are going to evaluate them again, but at least they are all fairing well and they are contributing well. We have given them starter packs such as the feed, drug; we gave them N100,000 each to buy sheep and goats and start their businesses in livestock production in their locality. The amount expended on this project is close to N20 million.”

Mr Bassey Harry from the Institute of Agricultural Research and Training (IAR&T), a resource person at the training, said: “You don’t need big capital to establish it. The animal can even be reared at your backyard with grasses, crop residue and household remains to feed them. Programmes like this should be encouraged and youths should participate actively. It’s better to start small and grow big.”

He added: “It won’t stop here. It should not be about giving beneficiaries money alone; the organiser should assess them after six months to see if they are truly practising.”

At the instance of the dignitaries, there were presentations by the trainees meant to evaluate the entire process of the training sessions. Divided into five groups, the trainees presented on disease management; feeds and feeding; management practice; marketing; and breeds and breeding in goats and sheep.

The beneficiaries expressed their joy and assured that they would make use of the opportunities brought to them by Akande-Adeola. A beneficiary, Mrs Iyabo Aishat Oyetunde from Ogbomoso, expressed optimism that the programme would impact them significantly and admonished her colleagues to make use of the opportunity. She said the programme could alleviate poverty in the society. “Even though I have been doing this business, especially selling of goats, sheep and rams for a long time, this training now exposed me to best practices in sheep and goat rearing. I have received calls from people who have the seen the updates on social media platforms.”

Mr Jimoh Olaniyi Salawudeen from Atisbo Local Government Area of Oke-Ogun zone described Akande-Adeola as a builder of youths, saying: “I appreciate the philanthropic gesture of the organiser of this programme. The training will go a long way in helping us all. She is an uncommon politician. Despite that she lost the last election in her bid to represent our senatorial district, she has never, for once, reneged on the promises she made to always empower and touch lives.”