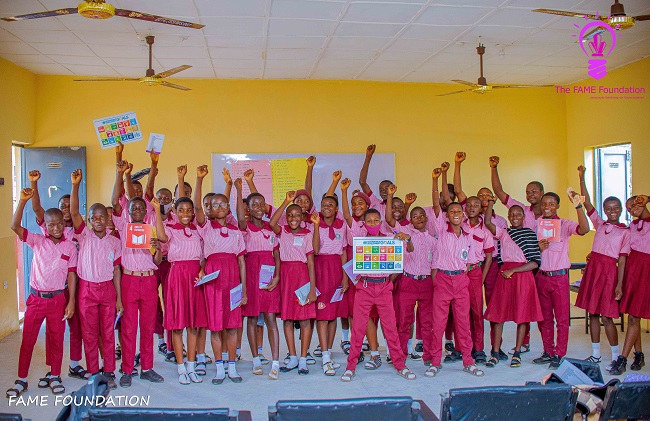 Share
At least, 2,590 underserved public senior secondary school students in six Local Government areas in Ibadan, Oyo State capital have been trained on leadership.
The training were part of the leadership development programme, a school-based, in-class delivery initiative organized by the Fashioned and Made for Excellence Foundation  (FAME).
The fourth edition of the programme tagged FAME Illuminate Leadership Program 2020 targeted senior secondary school students in SS2 – SS3 and ran for six weeks across 42 Oyo schools between October 13 and December 3, 2020.
The training focused on concepts on leadership, values, identity, character, purpose, active citizenship, the SDGs and empowered young people with skills required for success at school, and in life.
According to a statement by FAME Media & Communications Officer, Temiloluwa Osobisi in Ibadan 98 percent of the beneficiaries testified to the positive impact of the programme, adding that they have experienced significant growth in their development as leaders.

The statement also quoted the Executive Director, Mr. Raphael Stephen saying “the organization believes in a future where every secondary school student has access to quality leadership education, and all the beneficiaries will continuously be mentored in their various schools through the Fame Clubs of the organization at their respective schools till graduation.”
He added that: “Through this initiative, over 11,000 deserving teenagers in public senior secondary schools in Ibadan have been served since 2017 till date with the help of over a 1,000 FAME volunteer facilitators.

“This program embodies the organization’s commitment to continuously investing in the future of Africa by collaborating with key stakeholders across Nigeria, and Africa to provide access to quality leadership education in the language young people understand and to complement the Oyo State Government’s efforts in providing quality education, raising the standards of state-owned institutions and improving the academic performance of students at all levels.”