Community NewsLatest News
By Gbenga Olumide On May 15, 2019 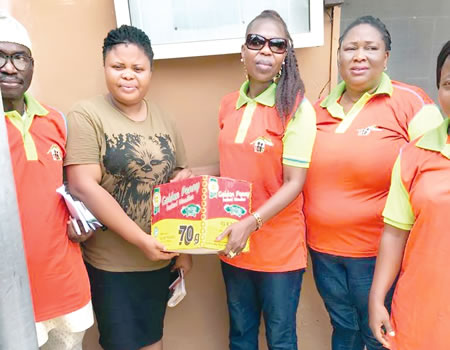 Inmates at Agodi Prisons in Ibadan, the Oyo State capital, had all the reasons to smile recently when a non-government organisation, Centre for Family Resources and Women Empowerment, paid a visit to the prison and donated items worth several thousands of naira.

While presenting the items, president and founder of the organisation, Chief (Mrs) Tessy Abosede, said it was part of the group’s mandate to touch lives and restore hope to the hopeless.

Mrs Abosede  said that the foundation had engaged in charity activities since its establishment and given support and restored hope to many who had given up in life.

She added: “We have provided financial support to unemployed youths and offered scholarship to indigent students.

She, therefore, warned members of the society, especially youths to desist from acts capable of causing public unrest.

Receiving the items, a prison official, who pleaded anonymity, said members of the foundation could not have access to the inmates, due to the short notice of their visit.

The official said any organisation that want to present gifts to the inmates must have sent a letter to notify the  state authorities of the prison at least, a month ahead of their coming.

She said this is neccessary because such letter must be sent to prison’s headquarters in Abuja for clearance.

Mrs Abosede thanked the prison official for receiving the items on behalf of the inmates, promising to follow due process in their next visit to the prison yard soon.

In the same vein, members of the group also visited Precious Pearls Orphanage at Ramoni Owoyemi Street, in Egbeda, Lagos State where gift items were  presented to  the inmates.