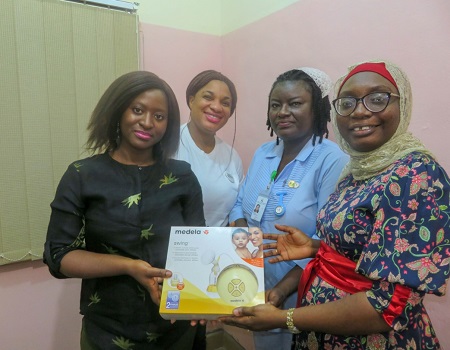 AN NGO, Wellbeing Foundation Africa, says it has donated breastfeeding equipment to the Neonatal Intensive Care Units (NICU) of selected medical facilities in some states in Nigeria.

Saraki said that the donations were parts of the activities marking the 2019 World Breastfeeding Week slated to hold annually between Aug. 1 and Aug.7.

She said that the donations were aimed at mitigating the challenges health facilities faced with regard to providing optimal neonatal intensive care feeding of premature and sick infants.

According to her, it is aimed at ensuring that fragile neonates may easily benefit from the immunity provided by colostrum, which serves as the first immunity for newborns.

She said the facilities that would benefit from the donation include: Lagos Island Maternity, Omotayo Hospital and Lifeline Children’s Hospital in Lagos State.

“The foundation is pleased to be donating these Medela products to selected hospitals across Lagos, Kwara, Kaduna and Abuja.

“This is part of our foundation’s goal to improve newborn health across the country and reducing neonatal mortality.

“I am pleased to support this NICU Pilot in Nigeria to promote early buccal administration of motherland’s own colostrums, to reduce rates of late-onset invasive infections, and mortality in preterm infants,” she said.