Islamic News
By Saheed Salawu with Agency Reports On Jun 5, 2020 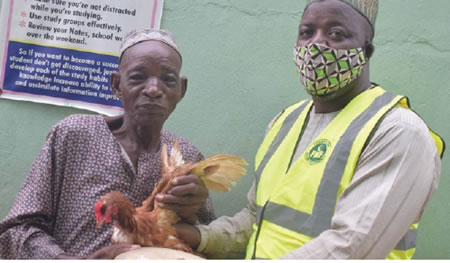 THE Fourteenth Moon Foundation (FMF) has distributed packages to about 50 families in Lagos State.

The distribution, which was done penultimate Thursday (Ramadan 28, 1441AH/May 21), ahead of the Eid al-Fitr celebration, saw representatives of each of the families receive a live chicken and 2.5 kilogrammes of rice.

Founder of the FMF, Qasim Badrudeen, said the gesture was aimed at assisting the beneficiaries “during this trying period.”

Badrudeen explained that the lockdown occasioned by the coronavirus pandemic had made things, including feeding, difficult for many families.

According to him, the packages distributed were donated by well-meaning Nigerians.

He said: “With the lockdown in Lagos and other places, many Muslims’ incomes were affected. And they would need to celebrate Eid as commanded by Allah. This year, we were able to reach about 50 families and we hope to reach more families in subsequent editions.

“It is our joy that we were able to put smiles on the faces of people. We appreciate the donors and pray Allah to continue to enrich their pockets.”

“This will, insha Allah, not affect our annual ‘Eat the Ram’ programme during Ileya. We appeal for support and hope to also put smiles on the faces of people during the festival,” he added.

The beneficiaries of the Eid-el-Fitr packages appreciated the gesture, praying for the organisation and donors.