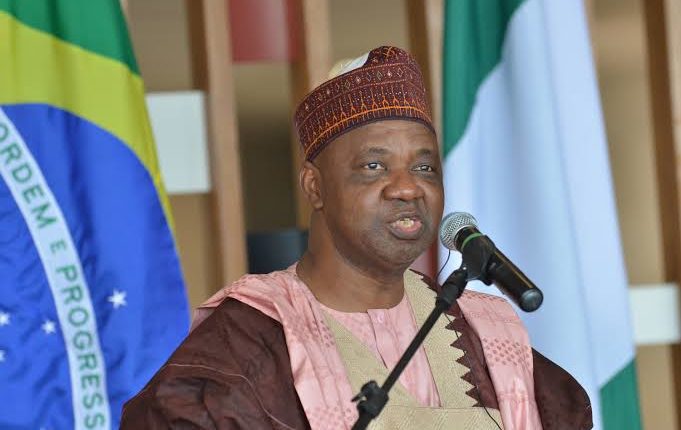 Former Vice President Namadi Sambo has appealed to the Academic Staff Union of Universities (ASUU) to accept the Federal Government offer extended to them, saying our children have suffered enough and that they need to go back to school.

He made this known, at the fourth quarterly meeting of the Conference of Alumni Associations of Nigerian Universities (CAANU) held at the Kaduna State university on Saturday.

The former two man stated that  ‘Nigerian students have suffer,  as the nation is going through another strike action as embarked upon by the Academic Staff Union of Universities (ASUU), which had paralyzed academic activities in the system for almost eight months.

To this end, he noted ”It is gratifying to note the offer made by the Federal Government to members of ASUU, though not exhaustively meeting the demands of the union, but certainly it is a bold step towards resolving the lingering crises in our University education.”

He said, he hoped the university lecturers will see the reason and accept the offer in the interest of our children.

Namadi urged the conference to consider the establishment of an endowment fund in their respective institutions to augment funding for research and critical infrastructure in the universities.

“Expectedly, Alumni of each institution will drive the process of mobilizing the private sector and philanthropists to generate resources and support for the endowment fund to pursue a cause that would fast track the country’s transition to a knowledge-based society.”

Speaking on behalf of the awardees, the former Vice president remarked that ‘No doubt, this honour is a call to duty that will spur us to do more for a system that has given so much to us.

”I, therefore, on behalf of all recipients of this prestigious award, sincerely appreciate the organizers of the event for the rare honour and recognition.”