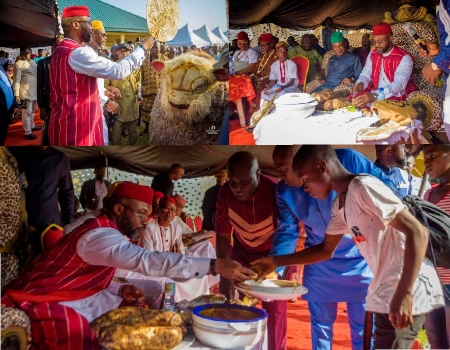 The two day well attended events which had the former governor of Anambra State Chief Jim Nwobodo and President of Ohaneze Ndigbo, Chief Nnia Nwodo, in attendance kicked off in the early hours of Saturday, the November 16, with an early morning jog within the community (Obosi). It is worthy to note that Chief Chidoka is an apostle and advocate of physical fitness which has formed part of his daily routine.

It was a beehive of activities the next day, Sunday, November 17. The day began with a thanksgiving church service with family and friends including the Vice Presidential candidate and former governor of Anambra state Mr Peter Obi joining chief Chidoka in appreciation to God for the worthwhile milestones in his life. Next was the historical iwa ji (yam) festival. The humongous ceremony which attracted dignitaries from across the world had series of cultural performances and masquerades as children queued up in their hundreds to have a bite of the roasted yam being handed them by the celebrant Chidoka.

Smiles on faces of guests at the event including the Imo state governor His Excellency Rt. Hon. Emeka Ihedioha can only be described as thrilled and entertained.

The celebrant, Chidoka speaking during the ceremony said the event was organized to showcase the rich cultural heritage of Obosi and Igboland.

He said he remained grateful to God who helped them to record bountiful harvests, especially the yam which is regarded as the chief crop in Igbo land.

“We are here to thank God for His Grace this year to celebrate new yam festival. As you can see, we are happy that our farm produce, especially yam which is our major crop, are bountiful, I look forward to a situation where we can observe this festival at the state level to further showcase our common cultural heritage,” Chidoka said.

Yam festival: Angry youths on rampage over refusal of monarch to attend festival