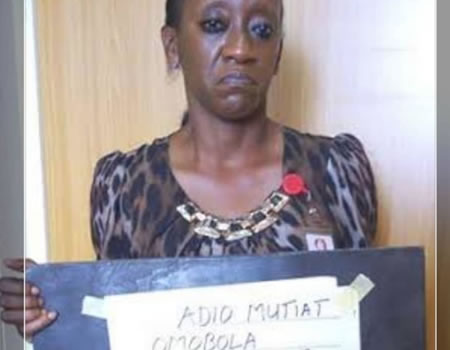 Justice O. M. Olagunju of the Oyo State High Court sitting at Ring Road, Ibadan, on Friday, sentenced a former Deputy Registrar of the state judiciary, Mutiat Adio to five years in prison without option of fine after being found culpable for stealing.

The conviction on Friday, makes it the second time the convicted registrar will be sentenced by a court over allegations
bordering on theft and graft, having been sentenced to seven years imprisonment in 2018 for fraud and illegal sale of land to the tune of N9.2 m.

She was allegedly pardoned by the last administration in the state in the twilight of the government’s stay in office and she regained her freedom.

But after her release from custody, Guarantee Trust Bank, wrote a petition to the Economic and Financial Crimes Commission (EFCC), over allegations of another fraud committed by Mutiat Adio in 2008.

According to the petition, the convict while she was the secretary of the State Judiciary Cooperative Society committed the crime when the cooperative applied for a loan of N90m on behalf of the members from the bank.

When the confused members went to her to complain about the exorbitant sums they got as loan, she told them to send the excess to her bank and she diverted it for personal use.

The charge proffered against her accused her converting the total sum of twenty-two million, three hundred and seventy-five thousand nine hundred and eleven naira sent to her account.

During the course of trial, the prosecuting counsel, Dr. Ben Ubi called nine witnesses including members of the cooperative society who applied for the loan while the defence counsel, Olaniyi George, called four witnesses.

Justice Olagunju in the judgement held that the prosecution proved the case of stealing against the suspect beyond reasonable doubt,

He said confessional statements and the second defendant witness also confirmed that the suspect diverted the returned funds to her personal account.

The court held that the convict misled the bank to package more than the amount the members applied for in order to benefit fraudulently, describing the act as purely criminal and found her guilty as charged.

Though the defense counsel in his allocutus appealed to the court to be liberal in sentencing her, being a former member of the judiciary in the state, the prosecution urged the court to give order for the convict to return the money to the victim of the fraud.

In his judgment, Justice Olagunju sentenced her for the second time, to five years in prison, without any option of fine and ordered her to return the money to Guarantee Trust Bank.

She was immediately handed over to the Staff of Nigeria Correctional center, Oyo State Command to commence her sentence.

We have constructed 1,200 classroom blocks across Benue ― Ortom