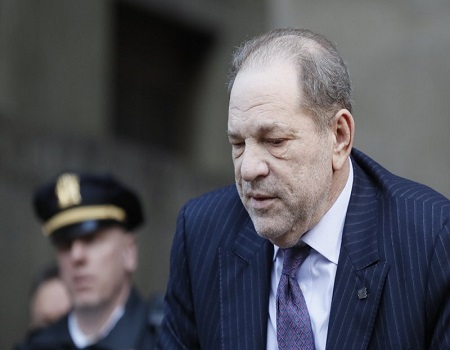 Former movie producer Harvey Weinstein was convicted of sexual assault and rape by a New York jury on Monday and handcuffed in court, a milestone verdict for the #MeToo movement that inspired women to go public with misconduct allegations against powerful men.

Once one of Hollywood’s most powerful producers, Weinstein, 67, was convicted of sexually assaulting former production assistant Mimi Haleyi in 2006 and raping Jessica Mann, a onetime aspiring actress, in 2013.

Weinstein was acquitted on the most serious charges that could have sent him to prison for the rest of his life. In the minutes after the verdict was read in court, Weinstein was seen talking to his lead lawyer Donna Rotunno. He appeared expressionless.

Justice James Burke ordered Weinstein to be held in custody and he was put in handcuffs by officers in court.

He faces up to 25 years in prison on the sexual assault conviction.

He was convicted of third-degree rape which carries a sentence of up to four years in prison.

Elizabeth L. Jeglic, a Professor of Psychology at John Jay College in New York said, “I think this verdict is definitely a vindication of all the women who have come forward and not been able to get a prosecution.”

During his trial, Weinstein often appeared feeble, entering the courthouse using a walker. He sometimes leaned on Rotunno for support. Critics had accused Weinstein of playing up medical problems to win sympathy but Weinstein said he had back injuries.

“He’s taken some good acting tips,” actress Rose McGowan said at the start of the trial on Jan. 6 while staging a protest near the courthouse along with actress Rosanna Arquette and other Weinstein accusers.

Weinstein made his mark with critically acclaimed films such as “The English Patient” and “Shakespeare in Love.”

More than 80 women, including famous actresses, had accused him of sexual misconduct stretching back decades. He had denied the allegations and said any sexual encounters were consensual.

Paul Callan, a former New York prosecutor who is not involved in the case, said Weinstein had strong grounds to argue the verdict should be overturned on appeal because of bias, noting that one of the jurors was the author of a forthcoming book on teenage girls and “predatory” older men.

During the trial, prosecutors portrayed Weinstein as a serial predator who had manipulated women with promises to open doors in Hollywood, coaxing them to hotel rooms or private apartments and then overpowering and violently attacking them.

“The man seated right there was not just a titan in Hollywood, he was a rapist,” Manhattan Assistant District Attorney Meghan Hast said during opening arguments.

Seated at the defence table, Weinstein often appeared impassive, though at times he looked intently at his attorneys when they cross-examined his accusers.

WHO tells world to brace for ‘potential pandemic’ as coronavirus spreads