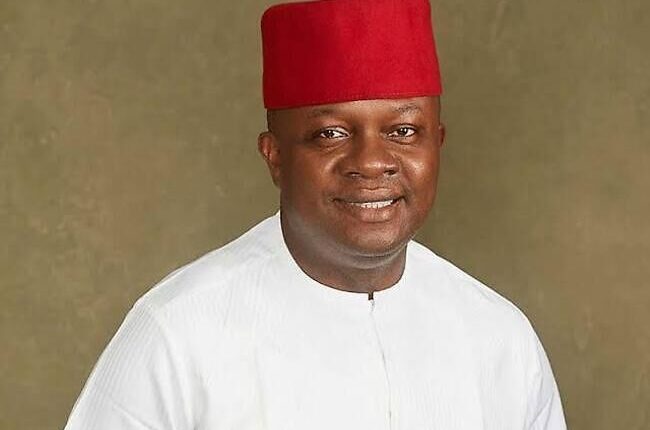 A former governorship candidate under the People’s Democratic Party (PDP), in the 2021 Anambra State gubernatorial election, Valentine Chineto Ozigbo has formerly crossed the carpet to the Labour Party ahead of the 2023 general election.

The defection was made official on Tuesday at a press conference which had in attendance the presidential aspirants of the Party, Mr Peter Obi.

While taking to the Popular social media platform, Facebook to share the development with his supporters, Mr Ozigbo in a statement posted on his page said joining the Labour Party was an easy decision for him as he found peace and love in the party.

He also described Peter Obi as his brother, friend, boss and leader. According to him, there is no way he could be in another Party while Peter Obi runs for President under the Labour Party.

The statement read in full:

“Today, I was formally received into the Labour Party by our Presidential Candidate, His Excellency, Peter Obi and the National Leadership of the fastest growing party in Africa led by Dr Julius Abure, our National Chairman.”

“Joining the Labour Party was the easiest decision because in @NGLabour I have found peace and love. I am grateful for the warm embrace for me and my political movement led by Chief Tony Offiah.”

“With my relationship with HE Peter Obi as my elder brother, my boss, my friend, and my leader, there is no way that he would be running for president, and I would be somewhere else. This is where I belong and I reiterate that I am 100% Obidient and #Obidient to the core.”

“Our mission of Taking Back Nigeria is well underway, and Peter Obi is fully committed to doing what it takes to rescue the destiny of Nigerian youth from the chains of visionless, incompetent, and self-serving leadership. Nigerians are blessed to witness the radiance of a generational leader who comes to the task with the kind of sincerity and compassion I see in Peter Obi. Together, we will take back Nigeria.”

“Thanks to Sir Izu Oraelosi, the General Manager of @VCOFoundation, Chris Okpala and team, for their presence and abiding support.” He posted.

Taking to Facebook to post some pictures taken with Mr Ozigbo at the press conference where he made the announcement, Peter Obi said, ” Today, the leadership of the Labour Party formally welcomed Chief Valentine Ozigbo into the ranks of the LP. Valentine C Ozigbo joining the LP adds immense value. It was gratifying to be present at the press conference announcing his joining the LP #OBIdient Family.”

NSCDC arrests 3 for diverting 33,000 litres of PMS in Kwara