Forgery charge against Saraki, Ekweremadu, others abuse of process —Court 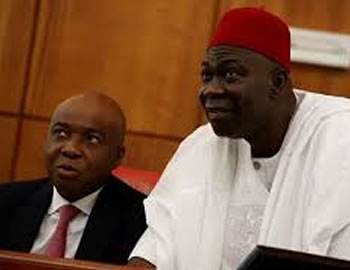 A Federal High Court in Abuja has held that the forgery charge brought against Senate President, Dr Bukola Saraki; his deputy, Ike Ekweremadu and two others by the Attorney General of the Federation (AGF) and Minister of Justice, Abubakar Malami (SAN) is a gross abuse of court and legal processes.

The court faulted the charge for being filed during the pendency of a civil action, challenging the propriety of the police report on the alleged forgery of the Senate Standing Rule 2015, in which the AGF and the Inspector General of Police (IGP) are defendants and even joined issues with the plaintiff in the court action.

Justice Gabriel Kolawole, who ruled on Friday on a motion ex parte filed by Senator Gilbert Emeka Nnaji seeking to stop the implementation of the police report on the forgery, held that the forgery charge against Saraki, Ekweremadu and others was done in a desperate haste that was not in the interest of the public.

Senator Nnaji had on July 23, 2015 instituted a civil action against the IGP and the AGF at the Federal High Court wherein he challenged the propriety of the police report on the alleged forgery of the Senate Standing Rule.

He later filed a motion ex-parte in which he asked the court for an order stopping the IGP and AGF from taking any step on the police report pending the determination of his originating summons.

Senator Othman Hunkuyi who wrote the petition that brought the police report had engaged Abubakar Malami (SAN), then a private lawyer, as one of his counsel that filed a motion for him (Hunkuyi) to be joined as one of the defendants in the suit.

Malami’s name is still reflecting as one of the counsel representing Senator Hunkuyi at the Federal High Court, Abuja and the case had been adjourned to July 6, 2016 by the trial Judge, Justice Kolawole.

The judge said that he would have nullified the forgery charge filed by the AGF before an Abuja High Court and set it aside for being a gross abuse of court and legal process if it had been filed before his court.

Justice Kolawole said the actions of the IGP and AGF whose offices were created by law were in bad taste because his court had, in the civil action asked parties not to do anything on the police report during the pendency of the civil suit, so as not to render the civil action nugatory.

The judge said the AGF ought to have used his power under the law to terminate any charge filed in breach of court process.

The AGF, the judge further said, acted in bad faith because before his appointment as AGF, he was one of the leading lawyers to Senator Hunkuyi who authored the petition upon which the police report was prepared and upon which the forgery charge initiated by the Federal Government was predicated.

According to Justice Kolawole, by his involvement as a private lawyer in the civil matter to the petitioner (Senator Hunkuyi) before the criminal charge was preferred against the defendants, he (AGF) ought to have realised the pendency of several court actions on the issues and ought to have used his office and law to terminate the flagrant abuse of the legal process.