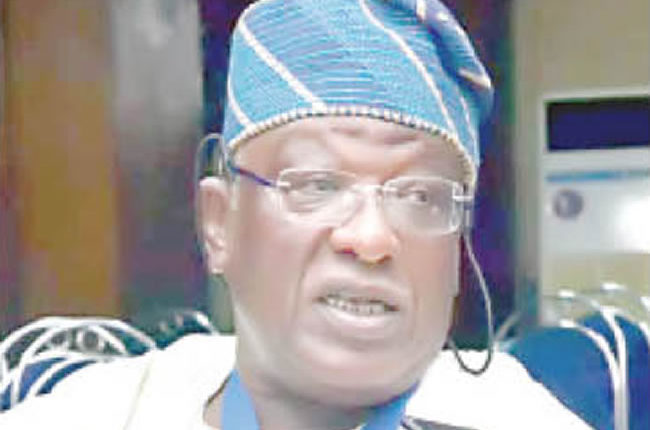 Chief Olumuyiwa Ajibola is the immediate past President of Association of Professional Bodies of Nigeria (APBN). In this interview with NURUDEEN ALIMI, he speaks on how foreign professionals are taking the jobs of their Nigerian counterparts, among other issues. Excerpts:

WOULD you say you have been able to achieve those set goals as APBN President?

We also looked at those instruments; which were in form of laws or let me say Executive Orders that the government put forward to help professionals. There were two major executive orders by the President, one was executive order 5 and the other one is executive order 7. Executive order 5 was designed to help Nigerian professionals to take charge of projects in Nigeria effectively but we did not quite see it being implemented properly before we set for our retreat last year. Right now, it is within the ministries, department and agencies to implement. Even at present, we do not see it being implemented. A lot of jobs are still going to foreign companies to the disadvantages of local companies. So the home grown professionals are gradually going down. We also looked at the Executive Order 7; it is not a kind we really appreciate because it was an alternative procurement method that was being suggested. Well, we made our case but I do not believe it was already taken. The purpose of that executive order is not quite clear because what it was supposed to do was to help government to do some roads which are being mostly damaged by industries in that zone and that those industries can undertake to do those roads while they would get back their money in tax relief. I do not believe it would be as profitable as doing the projects and having them for instance pay toll to use it.

The APBN stemmed from the need for professional bodies to speak with one voice and unified positions on common issues affecting professionals and professional practices. What is the position of the association on the recent hike in petroleum prices and electricity bill in the country, since these are issues professionals are also not immune to?

That is an interesting one, you know we have always held the view and it has been the view of many of the professionals. That a lot is been finalised in the bureaucracy, a lot of policies are being finalised. There is no doubt when that happens, a lot of factors would not have been taken into consideration. But when you have professionals soaked in the challenges, definitely they would have different ways they look at the same problem because it would affect them in different ways. The issue of removal of subsidy on petroleum is what you refer to as petroleum price hike. I do not call it hike, if the petroleum industry was deregulated, it would not mean hike. Is the difference between having some people benefit from the subsidy that was being paid out, that subsidy and those that were benefitting from it not really being so defined to know the people who really were benefitting from it is quite nebulous. So instead of having this dark area, eating deep into government purse, competing with money that government could spend on other things, it is better to let it go and let everybody adjust and allow the government to keep an eye on the sector so that there would be no room for foul play. So, indeed, that area I am not ready to say yes or no. The only thing I would like to add is that, they could at least involved experts in the sector to look at all circumstances in detail and advise on how to do it perhaps the amount that is being assigned to subsidy is not as much as that or more; you see there is need for independent examination of the sector so as to know the exact thiing to do. Therefore, as far as that is concerned, I do not know whether it is right or wrong to the extent of the prices that are being charged. But it is right to remove subsidy, it is right to deregulate. The impact of that deregulation on the prices is what is needed to be better refined. As for the issue of hike in electricity price, that, to me also is a bit of a problem. At the time they were to privatise the electricity sector, we advised them to do a more intensive study to ensure that those that would be the DisCos would be those that are very competent to do it and that they should create a company for the experts working in PHCN in order to create competition so they would know whether they are doing well or not. Really, what we are seeing is that we are paying for a lot of incompetence but since they have been privatised, how come we have not been able to get out of this price instability, this erratic power supply and all kinds of issues surrounding the power sector? Having said all that, these acts have been done, definitely, along with the various direct and indirect taxation that we are getting, definitely there is a problem with the income of an average Nigerian now because a good chunk of it is being taken mandatorily into government purse because of the dwindling oil revenue to make up for what government needs.

A lot of Nigerians have attributed the relatively high price of petroleum product in the country to lack of functional refineries, despite being an oil-producing country. You were once a member of the National Refineries Special Task Force (NRSTF), what would you say are the challenges holding the country down from having functional refineries that would drive its economy?

That is really a big one, From the point of view of my general experience in the petroleum sector, initially, the refineries were built and they were built by special purpose vehicles set up by government, that means the special companies for instance, Warri Refinery and Petrochemical Limited, so also the Port Harcourt refinery; these are legal entities that were formed to own and manage the refineries and bring returns to government. If you have a company, the company would buy all the factors needed to produce, they will produce, sell and when they make profits, you are smiling home, but when you have a company that you supply the factors to, at your won price and by the time they add value to that factor, you will also buy it from them at your own price. Now,

If they are in the middle and things go wrong with their equipment, how do they do it because they cannot really measure their profit now that the price of the goods is not under their control, the price they buy it is beyond their control. So, it means the refineries were just conversion companies converting crude into refined products. They were not really handling the revenue and managing the companies the way they want. For instance, if crude was not supplied by the pipeline, they would buy crude through using badges, boats to come and supply them and if the prices at which they are buying crude is higher, prices at which they sell would be higher. When all these things are beyond your control, when you need to do routine maintenance of your refinery, you have to appeal to government to give you money. Depending on who is there, they may not appreciate what you need and you may not get it, so, what it means is that the dream of the founding fathers of the refinery over the years dissipated to a bureaucratic process. And that was how the refineries continue to go down and become moribund. So, the refineries were all functioning very well initially because they were being managed with the model they were formulated for. If the business model is not changed, the refineries would not be able to work. But if it is changed and go for appropriate private sector business model, even if they buy crude from Ghana, they would know how to convert, sell and make profit.