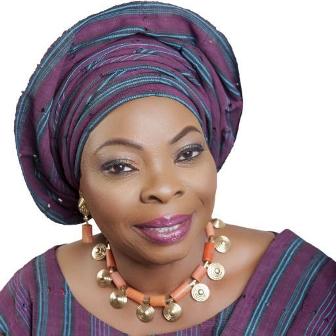 The chairman, Senate Committee on Trade and Investment, Mrs. Fatimat Raji Rasaki, has lamented the difficulty faced by her committee and indeed Nigerians in their efforts to make foreign investors to bring their investments into the country, is caused by utterances and said “our utterances have made them to move away from the country.”

Mrs Raji Rasaki, who addressed newsmen in Ado Ekiti, on Thursday at her N100 million empowerment programme for her constituents, said it was unfortunate that “our utterances outside the shores of the country” have adversely affected the economy in terms of refusal of foreign businesses to come to the country.

Raji Rasaki, representing Ekiti Central, lamented the poor state of the nation’s economy and blamed it on some archaic laws, the constitution and the attitude of some of our leaders.

She said: “I think what really affected us may not be intentional, but it is our utterances. When everybody is a thief, how can I come to a country where everybody is a thief? Then who will be in charge of the things I am bringing in? Am I putting the things I am bringing in under the custody of thieves? Who do I hold responsible if something goes wrong?

“So, sometimes, it is not the way we see things that we should say it. Sometimes, there are things we should say when we are among ourselves but when we go outside the shores of Nigeria, we need to be very cautious and mind our speeches. This has really affected us in terms of the coming of foreign investors.

“It is these investors that bring in dollars; it is not that we print them. But they’ve ceased to bring it. They’ve stopped coming and have refused to come. Some of them that were here before have started moving their money out of the country. I’m fortunate to be a member of the Aviation Committee; we are even begging them not to go, and we tell them that a friend in need is a friend indeed.

“We have to beg them because an airline that’s supposed to take off from Nigeria will have to go to Ghana to fuel before coming back to the country. They also cannot repatriate their money because it is stuck in banks here in Naira, not in dollar. So these things are affecting us and we have to pray to God to help us to overcome these problems. We pray that the executive have a second thought and look into all the recommendations that we have put together so that we can get out of this problem and everybody will be comfortable.”