For me, the opposite of poverty is not wealth —Dr Maymunah Kadiri 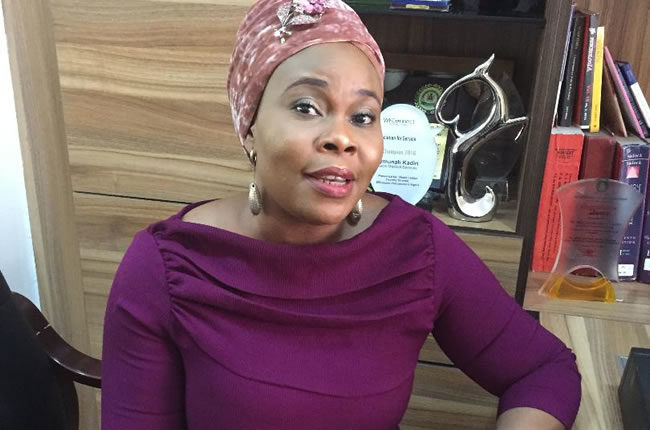 Being raised in a polygamous family must have shaped who you are today, isn’t it?

So, that shaped a whole lot of me because I needed to constantly work hard not to disappoint myself and could prove that I am teachable and must be sent to school. I had to also prove the fact that I should be loved amongst many. So, I was in a situation where my voice must be heard and I had to condition myself to be favoured and get ahead. So, coming from a polygamous family for me, is a blessing. I did not see some of the polygamous ills people from that kind of family setting see.

That means you only saw the good side…

Yes. I saw the need to be confident and bold because one has to speak up for oneself. Constantly, one is reminded that one is in the midst of many. In our house, we had more than an extended family. So, it was like a big community in another community. So, it shaped my view about life generally. So, when people talk about failure now, I would say look, ‘I know how to fail to be able to succeed.’  I knew that very early. I knew that the opposite of poverty is not wealth. The opposite of poverty is dignity in human beings. It is dignity in all ramifications.

Do these experiences make you feel like a boss lady anyway?

Yes. My polygamous background, the shaping, having a voice, being independent and making decisions that I am clear about without any doubt shaped me in many ways, including my marriage. But, when my husband came, I told him if I have to marry you we must go to court registry. I am from a polygamous home, but I do not deserve a polygamous marriage. You are the first person I will tell this. I said to myself that I was going to marry a white man because white men don’t do polygamy (laughs).

But eventually your husband is not a white man?

No. But, I achieved my aim of not being in a polygamous marriage which was the main reason I wanted a white man initially. My husband came to look for me. He is a lawyer and in fact one of the recently decorated Senior Advocates of Nigeria (SANs). He is a very focused person who knows what he wants. And you know when you want to marry and you speak with one of your friends about a particular girl. It was later I discovered he was always taking cases in the North so he could branch to see me. So, he started befriending my friends and they started seeing him as a serious this man and so, what then is the problem?. They started telling me to see reason to go for the man.

So, from there, we started a relationship. I remember the time we met was on my birthday and he came all the way from Lagos to Sokoto and it was only one flight from Lagos to Sokoto then which was Nigerian Airways at a specific time. He came on a night bus carrying sweet sensation’s coconut cake on his lap, coming with Ekene Dili Chukwu and landed in the morning with the cake. My friends just concluded, ‘you have got a husband (already) and there is nothing you can do about it.’ So, I called home to discuss with my mum about him. So, my mum went on research and told me he is a very responsible young man. He is very focused. For me, I didn’t see a rich man but a goal-driven man.

So, your man has no vice you want to change in him?

My husband is that type of person that will help you analyse things and even give you the pros and cons. So, what is that thing he wants me to change? Nothing really. But, I knew early in the marriage he was so particular about his breakfast. So, there was a love language. His own is out of service, while mine is quality time. So, I was always rushing out because of residency, leaving for Lagos Mainland and the Island very early in the morning. But, I realised if this is going to be a problem, I needed to quickly arrest that before it would escalate and this took me to my childhood.

So, I said, ‘why would this be a problem for me?’ If it is a breakfast, it does not even take long and he does not even take lunch and dinner. So, I said, ‘let me make it possible.’ So, I made it possible in the sense that rather than giving excuses of time, I planned that if I am in the kitchen cooking, it is not more than 10 minutes. So, his breakfast is like a buffet for the past 15 years we have been married. So, I thought what am I telling this person that is making him unhappy?

So, your profession helped in the stability of your marriage?

A lot. In fact, my siblings are always saying if I was not a psychiatrist I would have seen a lot of things differently about my husband. This is because he has very, very deep advice and because he is a lawyer he will scatter it for you. So, my profession shaped my marriage to the extent that anger is not in my dictionary. I am the type that can give you 20 yards because I know we are humans. So, why would I be judging you? I would rather mentor you, find out if there are issues you are dealing with and making you act the way you are acting and help you proffer solution even if I don’t have the full solution.

How is life as a wife, mother and psychiatrist?

You just have to get it done. The thing is you can have it all, but not at the same time, and not in equal proportion. So, as a leader, you must be visionary and be a transformational leader so that the ability to delegate is something that lives within. So, if you don’t have it, learn about it and trust the process. You don’t need to be everywhere when everything is in process. So, being a wife, a mother and an entrepreneur has really helped me in knowing what is urgent, important and relevant. So, my children will be back from school by December 5 and be going back by January 10. When they are at home, my stay in the office would be reduced because I would be with them, and take them out.

So, you have no regrets being a psychiatrist despite your parents’ disapproval?

In fact, they are all psychiatrists by association now. So, people would call me and say your father gave me your number and I would say, ‘for what?’ So, my dad would always tell those who have psychological problems that ‘my daughter is in Lagos, but if you call her she would be able to call her colleagues in Benin that would help you.’ They now appreciate what I do. They see beauty in what I have been driving home since it is the medicine for the past, present and future.

I do a lot. I am unapologetic about this. I love to travel because I believe it is part of education. While most of my travels are business-related, I also have fun in the process. So, I do a lot of self-care in the sense that I have lazy days, watch Netflix and chill. I have produced two movies, by the way, for mental health awareness. I go to the movies and I watch the longest movies in the cinema – two hours, 45 minutes. I will go there just to rest. I do massage, I connect with a lot of family members and my friends. I am a quiet person but my job makes me talk a lot.

Is this why you were dubbed ‘Celebrity Shrink’?

(Laughs). Truth is I work with quite a number of celebrities and there are very few privately owned mental health facilities. So, venturing into this around 2012 gave me an edge. I was the first on Lagos Island. So, whenever there is a call for a psychological help, there is always the mention of Dr. Kadiri. I can’t really place how that name eventually came in. So, they say that is our celebrity shrink and the name got stuck. This is the same way a young adult changed my name from Dr. Maymunah to Dr. May.

The day I took the decision that I was going to be a psychiatrist. This is because I remember my mum had two miscarriages and a stillbirth. So, I also know that there would have been some emotional issues she was going through that we never really knew. So, deciding to be a psychiatrist was never for the name or for the fame, but to understand those things she might have gone through that I did not know then.

What are those things people don’t know about you?

What is your perception of feminism?

When you look at it, we all should be feminists. Why? This is because it is for equal rights, whether you are a male or female. Feminism is not a bad thing. I don’t see any bad thing in feminism. Feminism also entails that as you are grooming your daughter, you are also grooming yourself. It is just the way people are misperceiving it. In my own interpretation, it is equal right. Don’t give me a job because I am a woman. I don’t like it.

How I survived among my classmates like Okowa, Obaseki, despite being the smallest…