Footprints of a colossus movement (IV) 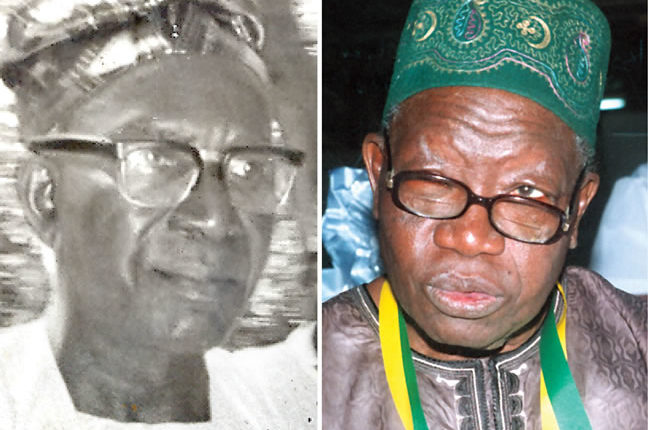 and unbelievable level of poverty that must be arrested now and immediately before something gives.  Some of us paid heavy prices to restore the current hybrid democratic/civilian governance currently in experiment. Those who have amassed so much  money that they can always relocate to the middle east and western countries should be mindful of the consequences of their actions which have held Nigeria down without possibility of any progress unless we return to Federal Constitutional governance for the greatest good of all Nigerians. Those who have opposing views to the necessity for Federal Constitutional Governance in an heterogeneous society are welcome to let us do realistic comparative analysis of Unitarism and Federal System in an enlightened setting, not wanting to please the current power holders. There are enough credible and educative authorities that have intellectually provided superior rationale necessitating the choice of Federal Constitution in any heterogeneous geographical space or country.

(vi)       We can decide to make a nation out of this country called Nigeria if Afenifere adherents resolve to bury the hatchet, unite their ranks and ensure that anyone who will seek for the votes of our people must prove his abiding faith in the just struggle for our liberation from this suffocating forced union whereby some have assumed a higher status of being the owners of the Nigerian project while the rest of us are treated as spectators and onlookers. The current national structure is unsustainable, and so therefore, pretentious unitarism and centralized governance can only permanently imperil the Nigerian project to which all Nationalities should have ordinarily and willingly subscribe.

May God Almighty grant us the grace to witness more AFENIFERE anniversaries. And may we continue to see the goodness of the Lord in the land of the living. Thank you for your attention.

I also seek your indulgence to correct the false accusation by the NCNC about carpet crossing after the 1951 Regional Election by reading carefully without bias this Colonial account of event.

When the election into the Western Region House of Assembly was completed in November 1951, the Action Group was surprised it won only 29 out of the 80 seats contested. In fact, the (AG) lost in all the constituencies in Ibadan; the capital city of the Western Region, Nigeria and likewise in Lagos, the capital of Nigeria. The AG had expected that as the “party of the Yorùbá it would sweep the elections with ease, at all levels; and in so doing, form the regional government. However, in Ibadan, the IPP won all the six seats up for grabs while in Lagos; the NCNC won all the available five seats. The correct version of this history goes thus: To avert conflicting claims over candidates, Mr Harold Cooper, the Government Public Relations Officer, wrote to the parties to furnish a list of the candidates contesting election on their platforms. Only the Action Group complied with this request and its list of candidates was as follows: Ijebu Remo Division – Obafemi Awolowo and M.S. Sowole; Ijebu Ode Division – S.O. Awokoya, Rev. S.A. Banjo and V.D. Phillips; Oyo Division – Chief Bode Thomas, Abiodun Akerele, A.B.P. Martins, T.A. Amao and SB Eyitayo; Osun Division – SL Akintola, J.O. Adigun, J.O. Oroge, S.I. Ogunwale, I. A. Adejare, J.A. Ogunmuyiwa and S.O. Ola; Ondo Division – P. A. Ladapo and G.A. Deko; Okitipupa Division – Dr. L.B. Lebi, CA Tewe and SO Tubo; Epe Division – SL Edu, AB Gbajumo, Obafemi Ajayi and C.A. Williams; Ikeja Division – O. Akeredolu-Ale, SO Gbadamosi and FO Okuntola; Badagry Division – Chief CD Akran, Akinyemi Amosu and Rev. GM Fisher; Egba Division – J.F. Odunjo, Alhaji A.T. Ahmed, CPA Cole, Rev S.A. Daramola, Akintoye Tejuoso, SB Sobande, IO Delano and A Adedamola.

Of the names on the list, only M.A. Ajasin from Owo Division, which comprised Akoko then, did not run because of party solidarity and unity in Owo. He stood down for A.O. Ogedengbe and R.A. Olusa to contest two of the three seats, which they won, while D.K. Olumofin won the third for the NCNC. Three secretaries of the Action Group, who ran as independents and won were: Alhaji D.S. Adegbenro, Egba Division; J.O. Osuntokun, Ekiti Division and S.O. Hassan, Epe Division.

At the close of polls on 24 September 1951, the Action Group had won 38 of the 72 seats in contention in the Regional Assembly. There were a total of 80 seats. Lagos had five seats in the West Regional Assembly all won by the NCNC in the election of 20 November 1951, while Benin had three won by Otu Edo candidates in the election of 6 December 1951. The poll had been postponed in Lagos and Benin following security concerns. Of the 68 candidates on the list furnished by the Action Group to the Government PR Department, 38 of the elected AG members were from that list. And they were as follows: Ijebu Remo – Obafemi Awolowo and M.S. Sowole; Ijebu Ode – Rev. SA Banjo and S.O. Awokoya; Oyo – Bode Thomas, Abiodun Akerele, ABP Thomas, TA Amao and SB Eyitayo; Osun – S.L. Akintola, J.O. Adigun, JA Oroge, S.I. Ogunwale, I. A. Adejare, J.A. Ogunmuyiwa and S.O. Ola.

In addition to the Action Group and the NCNC, there were local/divisional parties such as the Ibadan People’s Party (IPP), led by Chief AMA Akinloye; Ondo Improvement League, and Otu Edo of Benin. At the end of poll, the standing of the parties was as follows: Action Group 38; NCNC/Independents 25; IPP 6 and Ondo Improvement League 2. Otu Edo candidates won the three Benin seats, namely, Chief S.O. Ighodaro, Chief Humphrey Omo-Osagie and Chief Chike Ekwuyasi. Chief Ighodaro opted for the AG, while the latter two went to the NCNC. And of the six IPP elected members, only Adegoke Adelabu joined the NCNC. The rest of them: AMA Akinloye, Chief DT Akinbiyi (who later became the Olubadan of Ibadan), Chief SO Lanlehin, Moyosore Aboderin and SA Akinyemi, opted for the Action Group. The NCNC National Secretary, the late Chief Kola Balogun had sent declaration forms to the IPP assemblymen asking them to declare for the NCNC but Chief Akinloye returned all the forms uncompleted.

The three AG secretaries who had run as independents – Adegbenro, Osuntokun and Hassan, five IPP members, one Etu Edo, and one Ondo Improvement League, Chief F.O. Awosika; and Chief Timothy Adeola Odutola (Independent, Ijebu Ode) had swollen the number of the AG elected members. All the transactions had taken place before the inauguration of the Regional Assembly on 7 January 1952. These were not known members of the NCNC, nor did the party publish their names on the list of its candidates. For over a half century, the NCNC is yet to provide evidence to back its claim that it had won the West Regional election in 1951.

Mr. Cooper absolved his department of responsibility for the controversy generated by the NCNC after the election. At a post-election news conference in Lagos he said that «Of the winning candidates, the names of 38 were on the list sent to me by the Action Group. The six successful candidates at Ibadan were all among those who had been identified to me as representing the Ibadan People’s Party. No claim of any kind had reached us about the party affiliation of the remaining successful candidates.» Why did the NCNC not send a list of its candidates for the poll to the Government PR Department before that poll? The records of the poll conducted in the West and all over Nigeria by the colonial administration are available at the National Archives and can be accessed by any honest researcher. In this matter, it is facts that speak, not what some political/ethnic partisan said or did not say, as shown below.

Faced with this set of circumstances, the Egbé Omo Oduduwa lured twenty victorious candidates on the ticket of the smaller rival parties to join the Action Group; thereby tilting the balance in favor of the party, against its primary opponent; the NCNC. Some of the leaders of the small parties were offered ministerial appointments to join the AG. One of them was Chief Augustus Akinloye who was appointed the Nigerian Minister of Agriculture and Natural Resources; and who reciprocated by persuading four out of his five victorious colleagues in the IPP into joining the AG. The only IPP member who refused to join the AG was Hon Chief Adegoke Adelabu, who, instead, joined the more national NCNC.

The Ibadan electorate did not take kindly to the defection of its elected representatives on the platform of IPP to the Action Group. They used the opportunity of the 1954 federal elections and the 1956 regional elections to express their aversion of the Action Group. In the 1954 Federal elections, when both parties went head to head; the NCNC won 22 seats in the House of Representatives of Nigeria while the AG secured 19 seats. In Ibadan, the capital city of the Western Region, the ruling party AG secured just one out of the five federal seats up for grabs. The loathing of the AG by the Ibadan electorate was further demonstrated in the regional elections, which was held on May 26, 1956. Despite the fact that the election was held after the AG had been in power for five years, and had implemented significant social projects, particularly in the area of education; the results for 1956 were: 48 seats won by the AG and 32 seats by the NCNC. However, a closer scrutiny of the actual votes cast revealed that, the margin of victory between the AG and the NCNC was just 39,270 votes. The AG got 623,826 or (48.3%) of total votes, while the NCNC got 584,556 or (45.3%) of the total votes cast. The battle lines had been drawn; the ensuing mayhem and ruthless machinations that encapsulated the Ibadan political scene, degenerated and continued to spiral out of control until 1966, when the military seized control of the government, and banned all political parties in Nigeria.

In summary, the Action Group entered into an Alliance relationship with the Ibadan Peoples Party, IPP and others just as the NCNC went into Alliance with the NPC in order to form a majority at the National level. Except for pernicious posturing and unbridled hypocracy if the NCNC alliance with the NPC was not described as carpet crossing, that which was struck by the AG and others should not have been given negative/pejorative description.

Buhari, it’s almost getting too late to act

Anambra 2021: Why I am supporting Soludo ― Victor Umeh