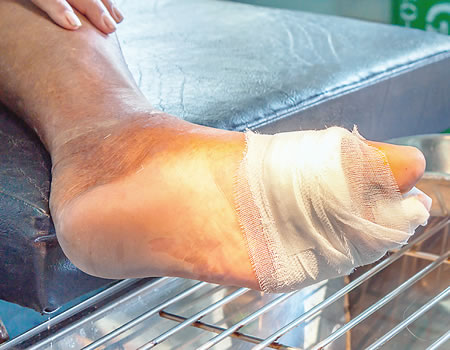 In a new study, experts say that the high burden of diabetic foot ulcer accounted for about a quarter of diabetes-related hospital admissions in Nigeria.

Researchers in a multicentre evaluation of diabetic foot ulcer in Nigeria over a year period in six tertiary hospitals in Nigeria recorded high amputation and mortality rates of 35.4 per cent and 20.5 per cent respectively.

They had evaluated the patients’ profile, ulcer characteristics, associated co-morbidities and outcome of 336 patients with a diabetic foot ulcer in Nigeria. The majority (96.1 per cent) had type 2 diabetes.

In addition, 14.6 per cent of the subjects in this study were unaware of their diabetes status until they presented with a foot ulcer.

Aside from diabetes, the commonest diseases in these patients were hypertension, anaemia and hyperglycemic emergencies. One hundred and nineteen subjects (35.4 per cent) suffered lower extreme amputation(LEA) while 10.4 per cent left against medical advice. The median duration of hospitalisation was 52 days with a case fatality rate of 20.5 per cent.

The researcher, pointing out that the burden of diabetic foot ulcer in Nigeria is very high, identified challenges on the problem to include a low level of foot care knowledge among diabetic patients and overdependence on self-medication.

Others are unorthodox medicine following the development of foot ulceration, late hospital presentation, and high amputation and mortality rates.

They expressed worry that the bulk of  patients (73.8 per cent) belonged to the young and middle-age categories and nearly three-quarter have had diabetes for less than 10 years duration.

According to them, the prevalence of diabetic foot disease largely reflected the poor quality of diabetes care they were accessing especially at primary and secondary healthcare levels where the bulk of the patients came from.

Given that diabetes foot ulcer constitutes about a quarter of diabetes-related hospital admissions in Nigeria, they, therefore, suggested extensive foot care education within the framework of a multidisciplinary foot care team to drastically improve diabetic foot outcomes.

They declared, “We advocate for massive public enlightenment programmes about diabetic foot with an emphasis on its prevention and timely treatment. Massive training of diabetes educators and podiatrists in Nigeria to improve foot care knowledge and foot care practice is strongly recommended.”

Nigeria bears the greatest burden of diabetes prevalence in Sub-Saharan Africa. In the last two decades, Nigeria, for instance, has witnessed more than a 100 per cent increase in the prevalence of the disease, from 2.2 per cent in 1997 to nearly six per cent in 2015.